Below The Huber Ice

A chapter from
Below The Huber Ice
BY Lucas Kitchen 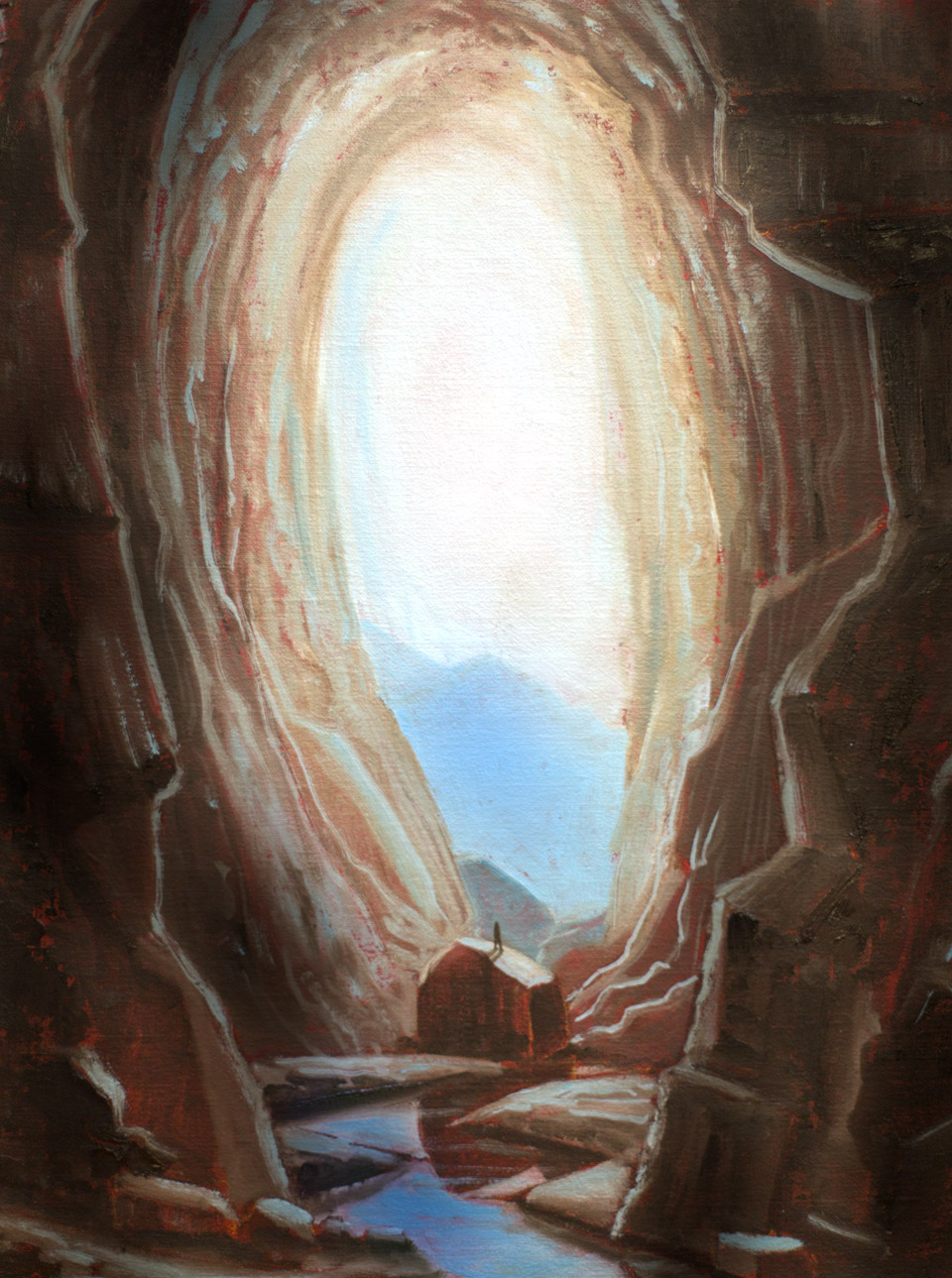 This time, the door moaned as it slid open. It sounded as if it had not moved in years. I had expected to see nothing but darkness on the other side, so when light streamed through, I was really surprised. I squinted and put my arm up over my face to keep from being blinded.

The door got stuck with only enough space for me to squeeze through. I had to twist to the side to fit. My eyes had been hungry for light. I hadn’t realized how dark it had been until I stepped blinking into the glow.

The second thing I noticed was that it wasn’t cold. If there was light, that meant I had to be getting close to the surface. At least that’s what I thought. If I was near the surface then there would have been snow and ice. That’s not what I saw at all. There was no way this could be the surface. There must have been some underground light source.

Once I was all the way through the door, I looked around to find that there was an opening to the cave. The light that came through seemed like sunlight but it was somehow softer as if it was shining through a hazy filter.

A river of water was running out of the the rocks near the mouth of the cave. It didn’t feel like a dream, but it sure looked like one. I could hear the roar of water in the distance. I felt my heart beating faster as I moved through the door and tried to understand what I was seeing.

The opening of the cave had to be hundreds of feet tall. It was beautiful. It made me wish that Dad could be there to see it. He would have had to take samples, and study every little nook and cranny. I pulled out my sketchbook and began to draw a picture for him. I knew he’d want to see it.

I climbed up onto a huge rock and sketched for a few minutes. As I drew, my mind raced. I had nearly died in the cave behind me. It was like a weight had been lifted from my shoulders. I couldn’t believe the scene in front of me. What would I find? This was all such an amazing adventure. I just hoped that it would lead to my father.

After I finished my drawing, I climbed down off the rocks, refilled my water bottle and took a drink. Dad had told me to never drink water that is sitting still, and only drink water that is moving in an emergency. I figured that this water was so deep and had run through miles of rocks, it had to be clean. It was cold and tasted great.

I put my water bottle in my backpack after I had drained it a few times. I dug through my bag to see if I had any more meal bars. I couldn’t find any, which scared me. I had already eaten them all. Dad probably would have wanted me to save them. I put my hand to my stomach as it growled. I was going to have to find something to eat before long.

I pulled my Everlight off my head and clicked it off. Dad had been right - it was my life-line. Without that light, I would have been dead. I would have been a human popsicle in a pile of snow two miles overhead. I tried not to think about Dad being stranded in the Seam as I started to walk toward the cave opening.

As I got to the mouth of the cave, I could see for miles. It was beautiful. I almost could not believe what I was looking at. There was an entire ocean of blue water below. It was going to be a climb to get down to it, but I couldn’t wait to sit on the beach, and run my fingers through the sand. How was this possible? Six hours earlier I had been in snow and ice, and now I was looking out over a scene that could have been in the middle of summer.

I climbed over some rocks and kept walking. As my eyes took in the view, I started to notice something weird. Near the shore of the ocean, there was a huge cliff. It seemed to come up from the water and then turn inward like a dome. The cliff walls arced up and jutted across the sky.

I could see clouds, but the cliff walls were taller than even the clouds. It was like the cliff rose up so high that even the sky was underneath the roof. I could barely see that far, but in the distance it was like there was a huge ceiling of crystal that rested on the cliff.

I stared at it a long time trying to understand what I was seeing. It looked almost like ice - as if an enormous piece of ice was actually the roof of an underground cave. It took a while before I understood what I was looking at. Suddenly, the vision of Dad crawling down into the Seam flashed into my mind. I thought of the crack in the ice.

What if this was an underground ocean with a glacier for a ceiling? Was that even possible? It was like its own little world. Maybe the Seam was just a crack in the roof of this underground world. I squinted my eyes, trying to see anything that could support my idea. I looked past the clouds and into what looked like the sky.

In the far distance, I thought that I might be able to see a very faint crack in the sky, or the glacier roof. I couldn’t believe it. I guessed in some way it made sense. There were huge underground areas that had never been explored. It was possible that this was a huge valley that got covered with a glacier, or maybe even a crack that opened up underneath one.

I continued walking, trying to find a way down to the ocean. It was almost too much to believe that this was underground. I couldn’t see the sun, but the entire sky glowed like a huge blue lamp shade. It had a deeper greener blue than the normal sky, but I was pretty sure I could get used to this one pretty quick.

I finally found my way down from the cave mouth and onto a bit of ground. I could see for miles. The ocean and the glacier sky stretched out farther than my vision did. Below me, there was a bridge of land that jutted out for a long distance. I thought I remembered hearing that kind of shape called a peninsula. I traced its lines with my eyes trying to decide how to get down.

It was covered in green. So, if my theory was right, there was enough sunlight that got through the glacier roof to let plants grow. It was like something out of a movie. I pinched myself to make sure I wasn’t in a dream.

An ocean breeze drifted up the rocks where I was. I could smell sea and the forest below. I took a deep breath. It was almost like being home. I could hear the ocean waves below me. I knew it was going to take a while to get down there but I was making progress. I looked again trying to decide the best path to take.

I nearly fell when I saw what happened next. In the far distance below me, I watched a ship sail right into view. I held my breath as my eyes followed the tiny spec. I blinked to make sure I wasn’t seeing things.

“Hey, Ship!” I yelled. I could tell it wasn’t loud enough. The ship continued on its way. “Wait for me!” I shouted as I waved my arms like a wild man.

Before I knew it my feet were in motion. I was moving faster than I had moved since I was running from Smelly. Rocks and dirt tumbled around my feet as I made my way toward the beach. I wasn’t sure if I could make it in time to catch that ship, but I didn’t want to get left behind.

I nearly fell a few times as I rocketed downward. What would have taken me a few hours, if I was being careful, only took me about fifteen minutes. I found another flat area where I decided to take a rest. I was breathing hard and my lungs were burning. I was almost there. Only one more cliff to descend and my feet would be in the sand.

I scanned the beach for signs of other boats or people. I bit my lip as my eyes caught sight of her. I didn’t know who she was but she was the first person I had seen since my dad disappeared. She looked like she was gathering up nets. She was standing next to a boat. Again I waved my arms wildly and shouted at the top of my lungs.

“Up Here! Look Up Here!” It was like trying to shout across a football stadium with thousands of fans screaming. There was no way she could hear me. So I started to climb down. This cliff was steeper than the last, but I didn’t care. I was going to get down to that beach. I was so tired of being alone that I could imagine running up and hugging the girl I had seen.

As I worked my way down the cliff, I could feel success. Maybe they even knew where my dad was. Finally my feet dug into the sand at the bottom of the cliff. I had made it. I turned around from the cliff and couldn’t believe my eyes.

To Be Continued In:

ACROSS THE HUBER SEA