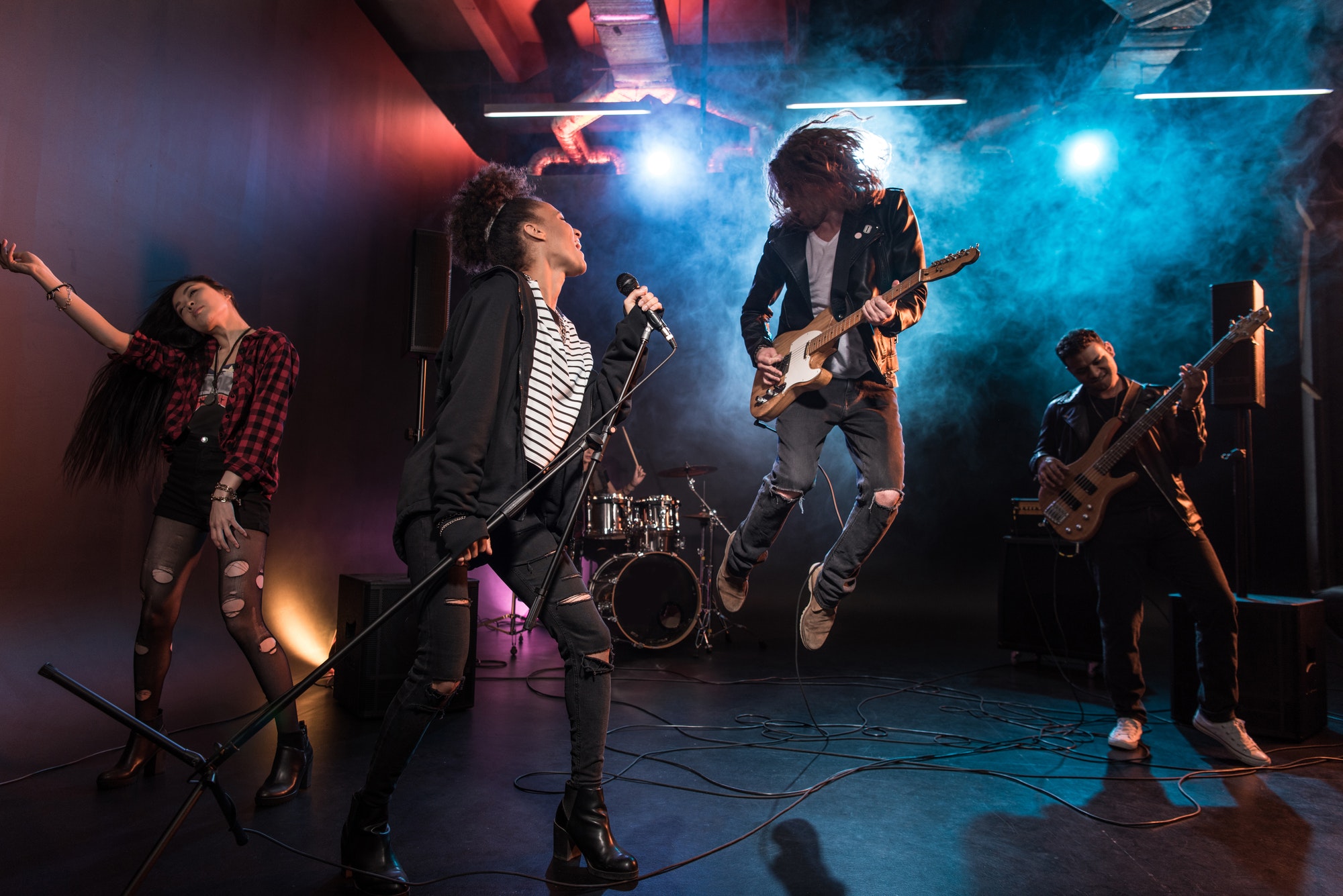 "I'm in a band, come see our show this Friday," I said as I handed a flyer to a girl I didn't know. 'LED in concert at the Java Jira,' it read in big, bold text. She glanced at it with curiosity and then at me. She was pretty. I hoped she would come. I hoped she'd come with other cute friends. I wanted recognition for the hours of songwriting, gig seeking, and garage practice sessions. In short, I wanted fame.

There was a mighty music scene in the little town where I grew up. That may not seem strange since most modern metropolises have a vibrant range of live music offerings. However, the population of Kilgore could fit in a high school football stadium. The plethora of rock bands in our tiny hamlet was impressive, especially considering that most of them were Christian bands. That was the post-grunge era, where the music was loud and unorganized. Flannel was the uniform, and the lyrics were indecipherable.

I have a youth minister friend who says that kids don't play instruments anymore; they play video games. Why were there so many Christian bands in our area and era? At that time, the cool kids played sports; everyone else was in a band. My friends joked about how many bands I joined. I was a drummer, and drummers were in high demand. At one time, I kept the beat for six different rock 'n roll acts. There wasn't a night of the week that I wasn't sitting at my drum kit somewhere. It's a blur now.

The popularity of being in a rock band could probably be traced back to one hard-rock Christian band, which reached a measure of regional success throughout East Texas. Model #777 was the top Christian band East of Dallas. This band, like so many others, was made up of four charismatic and passionate guys. They loved rock 'n roll and they loved Jesus. It was a dynamite combination since most parents of high school kids would balk at the idea of releasing their little darlings to go to a rock 'n roll show. Oh, the horror of drugs, sex, and rock 'n roll was too much. Any motivated teen at that time could simply say, "Mom, I'm going to see a Christian band.”

The four horsemen of this flagship rock band were scene builders. They were master hype men. They believed in their product and they knew how to sell it. The first time I saw them live I was mesmerized. They had the best stage show of any in the area. They had theatrical haze, an impressive light show, an automatic bubble maker, and a homemade machine that dropped glitter as they jammed. They even had a fifteen-foot crown of thorns that hung over the stage and shook like an earthquake when they let loose a face-melting solo. They held a captive audience spellbound for ninety solid minutes. Afterward, they left us wanting more. Though it might sound silly now, it was inspiring.

It wasn't long before there was a wave of others, reaching for the elusive commodity of local fame. My brothers and I were swept up in the frenzy and found ourselves shirtless and sweating on the various stages that were available for amateur Christian bands. Our band, like most, was not as good as the original, but it didn't seem to matter. What we lacked in quality we made up for with sheer ear-splitting volume. Our promise to the audience was an hour of mind-numbing noise and permanent hearing damage to remember us by.

Around a smattering of Christian bands formed a fickle audience of local fans who could be found Friday and Saturday nights at the local Christian venues, which were mostly churches. The churches allowed these loud, raucous nights in hopes of attracting the deafened masses of teens to their Sunday morning services. By and large, the high schoolers of the area were happy enough to attend the rock show but were not interested in becoming Sunday's pew sitters.

Even though the sheep scattered more than they grazed, a handful of churches were able, with near-magical resolve, to convert the Friday attendees to Sunday church-goers. Without exception, the key was to turn Sunday morning into a rock show as well. The church leadership of some more flexible congregations extended the concert and filled their liturgical stages with the young men and women that had rocked out the night before.

The churches that could endure the volume were the most charismatic in the area. Thus the kids who converted from concert-goers to church attendees found themselves in churches that sold a markedly more emotional brand of Christianity. Those teens that churches were able to retain were drawn in by moving services in which worshipers were told to feel more, press in, love God deeper, and other buzzy catchphrases. The entire emphasis was on one's ecstatic experience with God, and this approach gave very little time to biblical exploration. That was a kind of faith I was not at all familiar with, but these were my friends.

I visited one such church called Rock Hill. The name was fitting since it was both on a hill and offered a rock style service. At first, I found it strange that they did their services on Friday night. By the end, I understood. It was high entertainment on par with the theater or a sporting event. The ceremony began with prayer—no problem—though, I wasn't fond of holding hands and rocking back and forth with complete strangers. Next, while still holding hands, the congregation danced around the room. Imagine a conga line set to the worship tune; Better Is One Day. Then those who were most moved began shivering, shaking, and convulsing. They fell on the ground. A 'holy' blanket was placed upon their still convulsing body. Heaven forbid a person prone to seizures attend such a service. No one would ever know they were having an authentic medical emergency. Then those who were not slithering serpentine across the floor began babbling in what I'd describe as ecstatic gibberish. By this time, I found myself sitting in the back pew with a withdrawn look painted surreptitiously across my face.

"Come look outside," a sweating, red-face man shouted into the silence between a couple of the songs. He then explained, "It's nothing but rain clouds all around us, but God has opened the skies right above the church."

Many rushed outside, including me, though reluctantly. I heard mumblings even among the most devout, that his sky sight wasn't exactly accurate. It was a solid block of black cloud cover by the time I cast my eyes to the heavens. Maybe my faith wasn't strong enough. I left that night feeling confused about what I'd seen. I wasn't pulled in by the charisma of the scene, but I had to admit these people were excited about their faith. It was a kind of excitement that I didn't know how to share.

"Look at my filling," a friend said the next week. He was a regular attendee of Rock Hill's services. "God did a miracle and turned my fillings gold." I peered into his gaping mouth, a cavern with coffee laden breath. All I saw was black fillings that covered his back two molars. I leaned in, thinking that a miracle of God should be more obvious. This was not.

"Uh-huh," I said, not wanting to disagree with what he thought was a miraculous dental visit. Others were not so placating as I. Before long he stopped claiming the miracle. The irony was that he was the only one who was physically unable to see the supposed gold guided miracle. Nonetheless, he was the most convinced, at least for a while.

There were a lot of young people in those years who hopped on the emotional bandwagon, but that wagon was one driven by feelings and mysticism. This group of exuberant teens made Christianity a popular option at Kilgore High School. Though, the evangelism that was done by them was as much an invitation into the music scene as it was an invitation to believe.

There were undoubtedly people who not only believed but committed their lives to discipleship, but many never really went that far. In the years after high school, I watched many of these friends drop out of a life of faith. In time these fervent young men and women who seemed to be giants of the faith began to dissolve. Within a few years, many had left it all behind.

In the frenzy and excitement, I often felt like an outsider. My faith was different from many other’s in that mine was hardly a passionate one. I rarely experienced elation concerning the Bible, God, or the Christian way of life. The new theology was this: Real Christians feel… something… anything. That was the overarching theme of East Texas Christianity among my peers. Whether or not someone was a Christian seemed to be based on whether or not they were experiencing intense zeal for God and Christ. There was little distinction between being 'on fire for God' and being saved. The inverse was then true too. If one was lukewarm, there was a real question about their eternal salvation. It was doing invisible damage to us that I would not understand for years to come.

In the following decade, a gob of those who came to faith during that time felt their passion fading. As the amber twilight began to lower on these soft souls going into the world, it became apparent that they had not been prepared to maintain a meaningful faith through trials. As soon as they moved off and went to college, started soul-sucking jobs, and raising kids, many experienced the waning of their faith. They no longer had the excited network of ardent friends. As a result, a sizable percentage no longer identify with the Christian faith. Many are even atheists now. How could they continue? If the teaching was—"Christians have passion!”—what are they supposed to think when their passion dissolved? The damage of this emotive-centric theology kept their roots so shallow that they were choked out by the weeds of the real world.

I got caught in the awkward double thought of it all. I was not inclined to agree with the emotion=faith equation, but it was hard to stay utterly undaunted by the colossal implications. Considering that I have the emotional depth of a boiled egg, I always felt insecure by my lack of emotion. I was too honest to pretend to be experiencing something if I wasn't. On a good day, I wondered why I couldn't feel what everyone else seemed to be feeling. On a bad day, I wondered if my lack of zeal might be due to a lack of salvation.