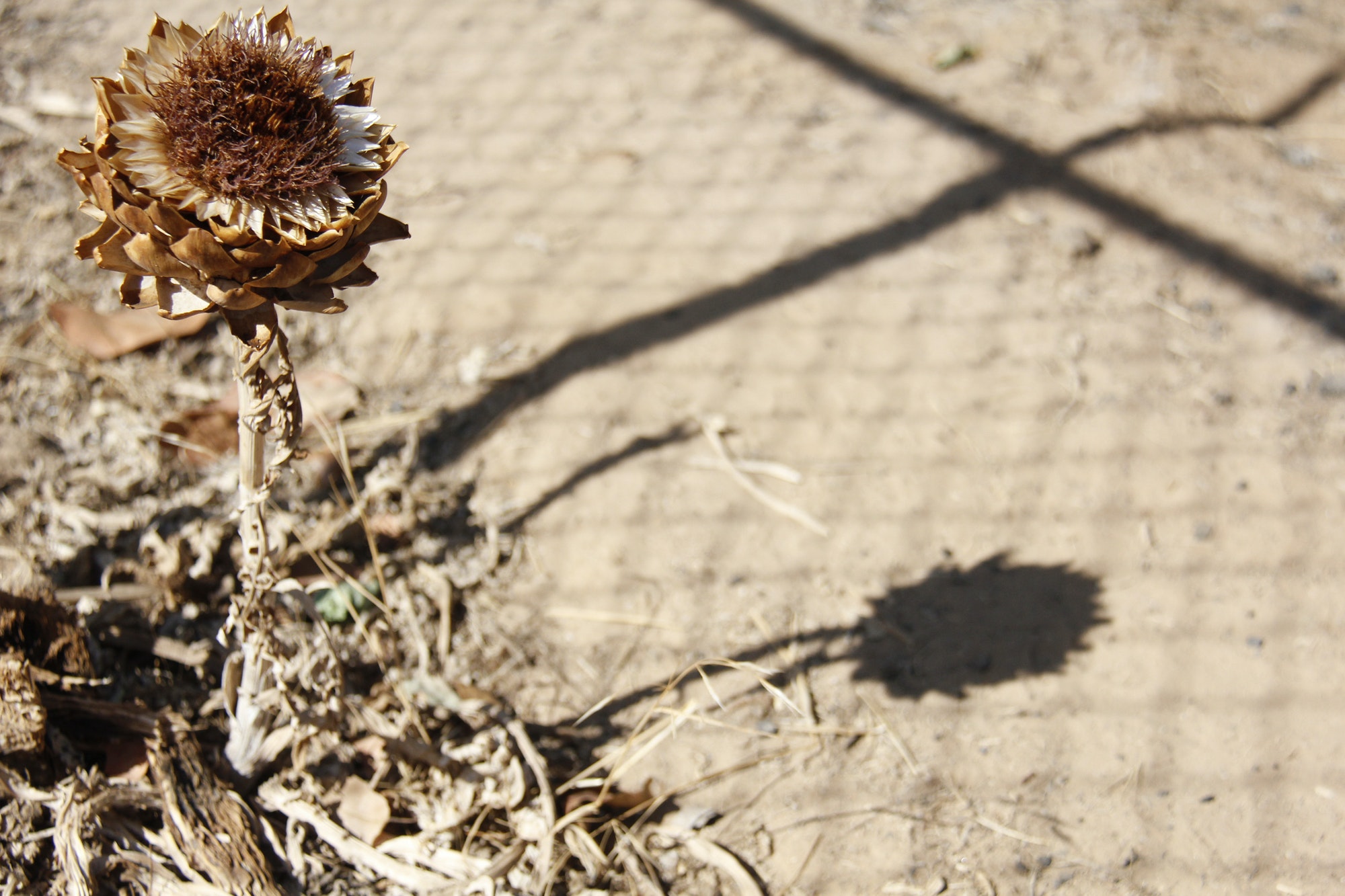 Before digging in to The Rocky Soil check out weeks one and two here .

For the first twelve years of our marriage, my husband and I were renters. Before moving to our current home, we rented a nice townhome with a tiny backyard. Although I couldn’t modify much about the home to suit my own taste, I requested permission from my landlord to install a small flowerbed in the backyard. He kindly obliged, and after months of mental planning and selecting just the right native plants, it was finally time to break ground.

This being my first attempt at gardening, I did not know the various types of soil I could encounter or how they might impact my efforts. I assumed my job would be fairly simple, though arduous. Boy, was I wrong! Not only was my backyard laden with clay, but being within very close proximity to a creekbed, it was also riddled with rocks. To my utter disappointment, it turned out that every inch of soil was filled with them. And that wasn’t the worst part. Some of the rocks were so large that I actually had to borrow a pickaxe from my neighbor to break them apart to remove them. Many tears were shed in this endeavor, but I knew that the presence of these rocks in my flowerbed would prevent my plants from sending out deep roots, choking off vital nourishment and thereby hindering their development. In the most basic terms, the rocks left no room for growth. If I wanted healthy plants and a thriving garden, my only choice was to remove the rocks.

In the Parable of the Four Soils, the second type of soil we encounter is commonly referred to as rocky soil, being described thus:

Some fell on rock: and as soon as it sprang up, it withered away because it lacked moisture.”

A little futher down in Luke, the parable is explained, and we read this about the same soil:

But the ones on the rock are those who, when they hear, receive the word with joy: and these have no root, who believe for a while and in time of temptation fall away.”

What This Does and Does Not Mean

It bears mentioning that while some commentators have argued to the contrary, this soil does not represent an unbeliever, nor does it represent a believer with so-called “spurious” faith, who proves that their faith was never legitimate in the first place. The Bible is clear here. In the explanation of the parable, Jesus says of the seed scattered on hard ground that the Devil comes and takes the word away, “lest they should believe and be saved” (Luke 8:12). So following that cause-and-effect statement of belief equaling salvation, when it says that they “believed for a while,” we know that they were saved. The second soil “sprang up” or germinated, meaning it had life.

That their belief was short-lived does not negate the fact that they had believed and had therefore appropriated the gift of eternal life, which can never be lost, per John 3:16; 5:24; 10:28 and 11:25-26. The fact that they fell away in a time of temptation is not an indication that they forfeited their salvation. That’s not at all what this verse is about. This verse is about discipleship–about staying the course.

Although the loss of salvation is not in view here, the capacity for believers to fall away “in time of temptation” is real and something we should take seriously. While we can be confident that our salvation is secure forever if we’ve believed in Jesus for the free gift of eternal life, the potential certainly exists that we might fall away when faced with hardships and trials that assail our faith and undermine our trust.

The book of Hebrews gives us a glimpse into the lives of some Jewish believers who were confronted with this very real possibility. Facing intense persecution for their faith, some of these brothers were considering abandoning their participation in the local assembly and returning to Judaism. Indeed, some already had. Beyond merely being ostracized for their faith, they may have even been threatened with death if they did not renounce their belief in Jesus as the Messiah.

The author of Hebrews issues a series of warnings to these fragile believers, encouraging them to hold on to their faith despite persecution.  In verses 8-11 of chapter three, the author quotes from Psalm 95, which recalls the falling of the Jews in the wilderness at Kadesh Barnea. He reminds his readers of how they failed to enter the promised land due to fear and disbelief. When ten out of twelve spies sent to survey the land brought back a report of giants, these wilderness Jews turned from faith to fear. Seemingly forgetting their divine deliverance from the perils of Egypt, they would not trust that God would deliver them from these foes. As a result, they failed to take possession of the land the Lord had granted to them, and their “corpses fell in the wilderness” (Hebrews 3:17).

After recounting the event at Kadesh Barnea, the author admonishes those who are contemplating a return to the Jewish sacrificial system, “Take care brethren, that there not be in any one of you an evil, unbelieving heart that falls away from the living God ” (Hebrews 3:12 NASB). There is a clear connection here between disbelief and falling away. If these Jewish believers did not continue to fix their eyes on Jesus and stand on his promises to be with them through trials and reward them for their faithfulness, they would lose their footing and fall away. This mirrors the experience of those in Luke 8:13, who “believe for a while, and in time of temptation fall away.”

While the parable is clear that the rocky soil believers’ faith was short-lived, and the Jewish believers in Hebrews were considering renouncing theirs, the example of the Jews in the wilderness shows us that sometimes falling away can fall short of actually abandoning your beliefs. The Jews in the wilderness did not renounce their faith. Instead, they ceased to trust and obey. What they abandoned was their discipleship.

If I’m Saved, Why Does It Matter?

Often, when the going gets tough, we lose heart and allow ourselves to be uprooted and thrown off course. After losing my first child due to premature birth, I spent years wandering in a spiritual desert. As if the pain of losing a baby wasn’t a hard enough thing to bear, my faith took a major hit when a friend suggested that my suffering was likely a result of sinful choices in my past. Instead of going back to the Word and the truth of God’s goodness and love for me (despite my suffering), I internalized this comment and began to doubt the Lord’s character and plans for my life. I ran away from His goodness, away from His comfort, away from the truth. And I stayed there for years.

In the initial description of the rocky soil in Luke 8:6, we read that these plants “withered away because [they] lacked moisture.” In my own case, I let fear and doubt loom larger than the Lord, and the result was that I cut myself off from the one source of nourishment capable of bringing me back to health and vibrancy. Lacking that vital connection, I, too, withered. While I never actually renounced my faith during this time, it would certainly be accurate to say that it was no longer functioning optimally. I had allowed it to atrophy, and it would take years to rebuild.

It is interesting to note that while Luke’s version speaks of “believing for a while” and “falling away,” Mark’s account talks about “stumbling”:

Afterward, when tribulation or persecution arises for the word’s sake, immediately they stumble”

Here in the west, we as believers may not face persecution to the same degree that others worldwide face, where their very lives are at stake. However, we are not immune to trials and tribulations, causing us to stumble and fall, choking off spiritual growth and rendering us powerless in our Christian walk. In fact, this is our adversary’s goal. He knows he cannot undo our salvation, but he can certainly rob us of blessings and intimacy with the Lord in this life and rewards for faithfulness in the next if we let him.  For this reason, it is imperative that we stay rooted in the truth and grounded in His Word!

Let us hold fast the confession of our hope without wavering, for He who promised is faithful”

Please join us next time as we take a look at the thorny soil, and other obstacles which can spring up along our path to growth.

6 comments on “The Rocky Soil”