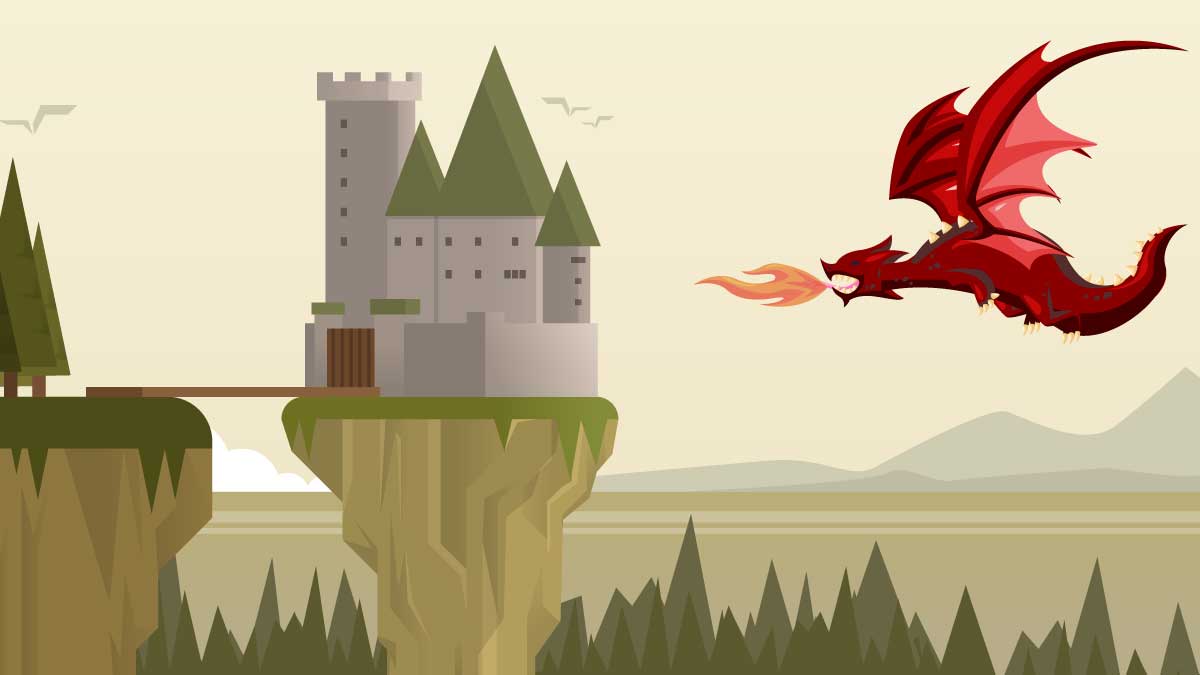 A note for parents, teachers, or older kids: Read the bedtime story to kids and use the guided discussion at the end to talk about sin. This bedtime lesson is intended for kids who have already believed in Jesus for everlasting life but is great for any kid who loves a magical story. In addition, you can listen to the author reading and discussing the story with his own kids. To do that play the video above.

There once was a magical kid-like creature. He was a sprog who lived in a big castle in a magical land. His name was Eloy. The castle he and his family lived in was so big it had lots of empty rooms on upstairs floors that he had never visited. His parents told him never to go into those empty rooms on the third floor of their big old castle.

For a long time, Eloy was happy playing in the rooms where he was allowed to go. But each day, he found himself thinking about those empty rooms upstairs. After all, if they were really empty, why would it matter if he went into them.

Maybe they weren't empty at all. Perhaps they were filled with good things that a little sprog would love, like candy, toy cars, and bicycles. He wondered what kind of treasures those empty rooms held.

He opened the first door to the first empty room, and he was sad to find that it really was empty, or at least he thought so at first. He stepped in and looked around.

He saw something shiny, red, and round on the floor in the middle of that big empty room. It looked exactly like a tiny egg except for the fact that it glowed red. He knelt to take a closer look. He reached out and was about to touch it when all of a sudden, it cracked wide open.

He laughed as a tiny red dragon crawled out of the broken eggshell. It looked up at him with fiery eyes and wriggled a small forked tongue. Eloy thought he was the cutest thing he had ever seen. He reached out his hand and let the little dragon climb on.

As he went downstairs, he decided to call the dragon Baffle. As soon as he said it, he realized that no other name was right. He put the little red creature on his shoulder. The dragon tickled his ear with his pronged tongue.

Later that day, when Eloy's parents got home, he wanted to tell them, but he decided not to. If he told them about Baffle, the baby dragon, they would ask where he came from. Eloy would then be forced to tell them he had gone into one of the empty rooms on the third floor. No, he thought, he would have to keep it a secret.

There were lots of times over the next few days when Eloy's parents looked right at the place where little Baffle was, and they didn't see him. It didn't take long before Eloy realized that his parents couldn't see the dragon. "What luck," Eloy thought, "I've got an invisible fire dragon."

One day, Eloy's parents told him to clean his room. Eloy didn't want to; he was having fun drawing pictures of Baffle. The little red dragon was having fun, too, posing for the pictures. Eloy decided to ignore and disobey his parents.

At the very second that Eloy decided to disobey his mom, Baffle grew three inches longer. Eloy was amazed.

Not long after that, Eloy lost his temper with his little sister, Ellie. As soon as he yelled at her, once again, Baffle grew five inches. Another time, Eloy told a lie to his dad. Even though his dad couldn't see it, Baffle grew nine inches longer and started to talk to Eloy.

Before long Baffle would hardly fit in Eloy's room and wouldn't stop talking. He loved his dragon, but he was starting to feel crowded, and he was scared of the things Baffle told him to do.

Each time his parents told him to do something, Baffle would say, "Don't do what your parents say. They are just trying to keep you from having fun." If Eloy disobeyed his parents and did what Baffle said, the dragon would grow and get louder.

A few times, Eloy tried to ignore Baffle, but the red dragon would spit smokey balls of fire at Eloy and growl at him. Baffle had become too hot to handle and too hard to harness. Almost every second of the day, Baffle was telling Eloy to do something bad. It got to the point where Eloy was doing every bad thing his red dragon told him to do because it was easier than resisting. Baffle got so big that it longer felt like the dragon belonged to Eloy, but instead that Eloy belonged to the dragon.

Eloy realized that he had to tell someone about his problem. He went to youngest brother Eleo, but he was too little to understand. Next, he tried his sister Ellie.

"Ellie, I found a dragon," Eloy said. With that, Ellie's eyes got very wide.

"Does she grow, and yell at you, and spit fire, and no one can see her but you?" Ellie asked.

"My dragon is a boy, but he does grow, and yells, and spits fire, and no one can see him but me," Eloy said but then added. "Hey, how did you know all that?"

"I have one too. I named her Baffle," Ellie said. Eloy was so surprised he could have eaten his own fingers.

"I named mine Baffle too," Eloy said. They stared at each other for a long time before either spoke.

"Is your Baffle screaming at you right now?" Eloy asked.

"Yeah, he doesn't want me to tell anyone about him," Eloy said. Right at that moment, Baffle blasted a hot red ball of fire at Eloy. Even though it was invisible, it hurt really bad. "So, what do we do?"

"We need to ask for help! I think we should go see Wizard, Waddly Wobblewog," Ellie said as she jumped, probably because her Baffle was shooting her with invisible fire too."

"He's a wise wizard who lives in a soggy log near the Hogdog bog."

"So you're saying we need to go see the wise wizard, Waddly Wobblewog, in a soggy log near Hogdog Bog?" Eloy asked.

"Well, I don't think I can say all that, but yes. I think he'll know what to do. He's just the sort that would know how to deal with a dragon problem." Ellie said.

They began packing their things right away. With their Baffles growling at them both, they decided to set out on their journey the next morning since it would be a Saturday, and they didn't have school.

...to be continued. Find out what happens in next the next chapter of The Draconus Saga.

It is when you want to do a sin real bad.

Sin is when you disobey what God wants you to do.

Can you name some sins?

What happens when you sin?

One of the things that happens when you sin is that you will want to do that sin even more next time.

It's kind of like how Baffle, the dragon grew each time Eloy disobeyed his parents or did something mean to his sister.

Wanting to sin can grow so strong that it feels like you can't stop, sort of like how Eloy's dragon got too loud and strong for him to ignore.

What can we do about temptation and sins?

Did you know that you can't beat temptation and sin all on your own? You need God's help. Each time you feel tempted to do something wrong, you can pray. In your prayer, you can ask God to help you not to do the sin.

Let's read a verse from the Bible:

One time Jesus was telling his disciples how to do what was right and not do what was wrong. He told them that it wasn't time to go to sleep, but they were really tempted to lay down and go to bed. He knew they were feeling strong temptation to disobey, so he told them how to fight the temptation and not sin.

What way did Jesus give us to fight temptation and not sin?

Prayer! When you feel like doing something you know is wrong, you can pray a simple prayer like this:

This is what Jesus tells us to do to help us not sin. You can do this as often as you need to. God doesn't get tired of hearing us ask for help to not sin.