Bedtime Lessons / Dragon Tales / In The Bog Of Confusion 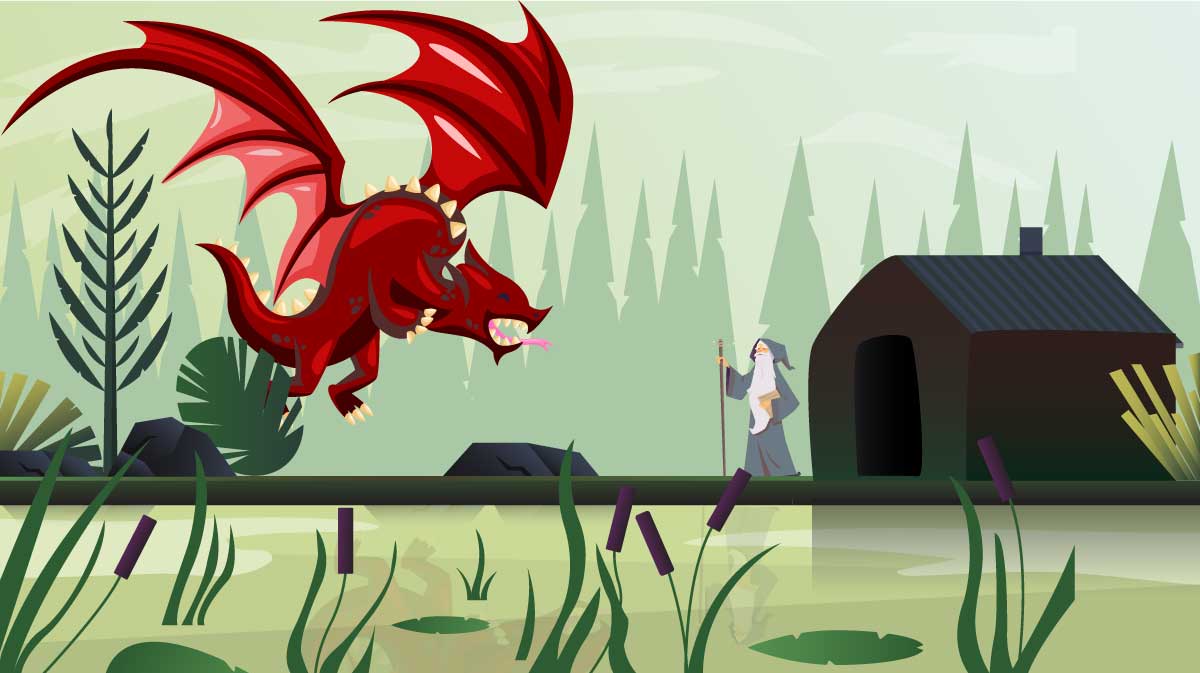 Chapter 2: In The Bog Of Confusion

A note for parents, teachers, or older kids: Read the bedtime story to kids and use the guided discussion at the end. This bedtime lesson is intended for kids who have already believed in Jesus for everlasting life but is great for any kid who loves a magical story. In addition, you can listen to the author reading and discussing the story with his own kids. To do that play the video below.

Eloy and Ellie's Baffle dragons did not want them to go on their trip. They growled and, woofed, and spat fire. None the less, the brave brother and sister set out on their journey Saturday morning because they didn't have school. Ellie held the map as Eloy led the way. They were making their trip to The Wise Wizard, Waddly Wobblewog, who lived near Hogdog bog in a soggy log. After walking for a few hours, Ellie spoke up.

"The map says that sprogs have to jog through the Hogdog bog because the wild Hogdog will flog us with his tail if we don't," Ellie said. That made Eloy very scared, so he stopped to look at the map with his sister. He pointed as he spoke.

"Look here; it says the bog is clogged with frogs that burp a stinky smog," Eloy said.

"There's also a hazy fog that will make us groggy. For more information, we can check the Wizard's blog," Ellie said.

"This trip is going to be a slog!" Eloy replied. They both took a deep breath and looked at the task before them. They were near the Hogdog bog.

"Are we ready to run?" Ellie asked.

With no more prolog, they did their best sprog jog through the Hogdog bog, dodging the hogdog flog, the smog-clogged-frog bog, and the slog-grog-fog. Without checking the blog, they arrived at the soggy log of wise wizard Waddly Wobblewog.

"Who goes there?" Came a crackly voice. It was the Wizard Wobblewog. He wore a full-length robe, had an explosion of white hair, and held a gnarled staff.

"It's me and my sister," Eloy said. He was about to say their names, but the wizard started talking before he could.

"Hello, Me," the wizard said to Eloy, and then he turned to Ellie. "Hello, Mysister. I'm The wise wizard, Wobblewog. How can I help you?"

"Ahh, so you want to change your name, ehh. That's a simple matter. You need to fill out the name-change form. I've got it around here somewhere," the strange old wizard said as he turned and began rummaging through stuff in his soggy log house. He found an old wet brown piece of paper and turned back to them, asking, "What do you want to change your name to, Sonny?"

"No?" The wizard asked, confused. "I've never heard of anyone named, No, but I guess if that's what you want to be called." He started to go through his things again. "Where is that eraser?"

"You can't be named Wizard Wobblewog. I'm already using that name. It'll confuse people for us both to be named the same thing. I must have forgotten to introduce myself? I'm the wizz wise-ard, err the wise wizard, Waddly Wobblewog."

Eloy grabbed Ellie's arm and pulled her away from the old man to talk to her.

"What are we going to do?" Eloy asked. "We can't make him understand us."

"Let's look around; maybe there's something here that can help," Ellie said. Eloy wasn't sure it was a good idea to look through the wizard's things, but he didn't know what else to do. "I'll distract him while you sneak and look around." They both nodded and turned back toward the wizard.

"Ok, I've decided what I want to change my name to," Ellie said to Wobblewog.

"Oh, I'll have to find a name change form," the old wizard said. Ellie grabbed his hand and lifted it in front of his face. "Oh, splendid, there's one in my hand. Ok, what name do you want?" He asked.

"Druzzlefunger Puddlewurtz Husselpudding," Ellie said slowly and loudly. As she said it, she made a hand motion to Eloy. Eloy started to sneak around behind the wizard now that the old man was staring at the page and he was trying to write the long name.

"Uh, I'm going to need you to spell that, Deary," the wizard said as Eloy snuck into his soggy log house.

The house was a terrible mess, even worse than Eloy's room back home. There was stuff everywhere. On most of it, there was the same word written. On the dishes, on the doors, even on the walls, the word "Confused" was marked out in big letters.

As Eloy walked through the house, he stopped when he spotted a big writing desk. On it, there was a note written in little letters. Eloy was sure it was the handwriting of the wizard. He whispered the words as he read the note.

"This note is written by Wizard Wobblywog. I've let my Baffle dragon grow too large. Baffle is now casting a confusion spell on my mind. I can hardly think normal thoughts anymore. If someone finds this letter, please help. My only hope is to ask Draconus for rescue, though Baffle dragon has me so confused I can't keep the thought in my head long enough to call Draconus for help. Draconus lives in the land above the mountain, beyond the clouds of forever. Instructions for getting Draconus' help are as follows: Step one: believe in Draconus. Step two: once you've believed in Draconus, you can ask him for help no matter where you are, and he will come." Eloy picked up the letter planning to carry it to Ellie, who was still talking to the wizard. As soon as he touched the letter, his own Baffle dragon started growling and shooting painful balls of fire.

"Dondra Pufflewiggens Souphat?" Wobblewog was saying as he wrote something on the piece of paper. "I've never met anyone that wants to change their name so many times, but Souphat it is."

"Ellie look," Eloy said. He handed her the note. She read it quickly as her eyes grew wide. The wizard kept mumbling something about the name change form, but they ignored him.

"Look," she said as she pointed to the note. "Draconus lives in the land above the mountain. That must mean we need to climb the mountain to find him."

"No, I don't think so," Eloy argued. "It says that all we have to do is believe, then we can ask him for help from where we are. I think we could do that right now, from right here." He watched as his sister thought about what he said.

"It is not enough to believe," Baffle said as his eyes glowed with fire.  "Because there is no such thing as Draconusss. Climb the mountain. Ssssee for yourself. There is no Draconusssss."

Eloy felt so confused and upset that he didn't know what to do.

Confusion is when someone doesn’t know what is right or when they think they know was is right, but they are really wrong.

What is a lie?

A lie is when someone doesn’t tell the truth. When someone lies to someone else, and another person believes the lie, we call that being mislead, being fooled, or getting confused.

Can you name some people in the story who were confused?

The wizard was confused but forgot he was. Ellie was wrong even though she thought she was right, which means she was confused. Even Eloy was confused because he didn’t know what to do at the end.

Baffle was the only one in the story who wasn’t confused. He knew the truth but told everyone lies to fool and confuse them.

Did you know that there are people who will say things about Jesus that are NOT true?

That’s right; there are people who are confused that will tell you things about Jesus that are not true. There are also people who know the truth about Jesus but will tell lies about him to fool and confuse you.

What are some lies that you might hear about Jesus?

He was not God’s son; he was just a man.

You have to do work to get eternal life.

He doesn’t give free eternal life to those who believe in him.

What are some things about Jesus that people get confused about?

What Jesus wants us to do.

What we have to do to go to heaven/get eternal life.

Let’s look at another verse?

Here’s a verse about some true things we know about Jesus.

For God so loved the world that He gave His only begotten Son, that whoever believes in Him will not perish but have everlasting life. (John 3:16)

What true things does that verse tell us about Jesus?

Jesus came to the world to be the Savior.

Whoever believes in Jesus will not perish (which means to be separated from God forever after death).

Whoever believes in Jesus has eternal life right away, and they can never lose it.

These are some true things that we need to remember so that no one can confuse, fool, or lie to us about who Jesus is and what he promises us.