A chapter from
In Pursuit Of Fruit
BY Lucas Kitchen 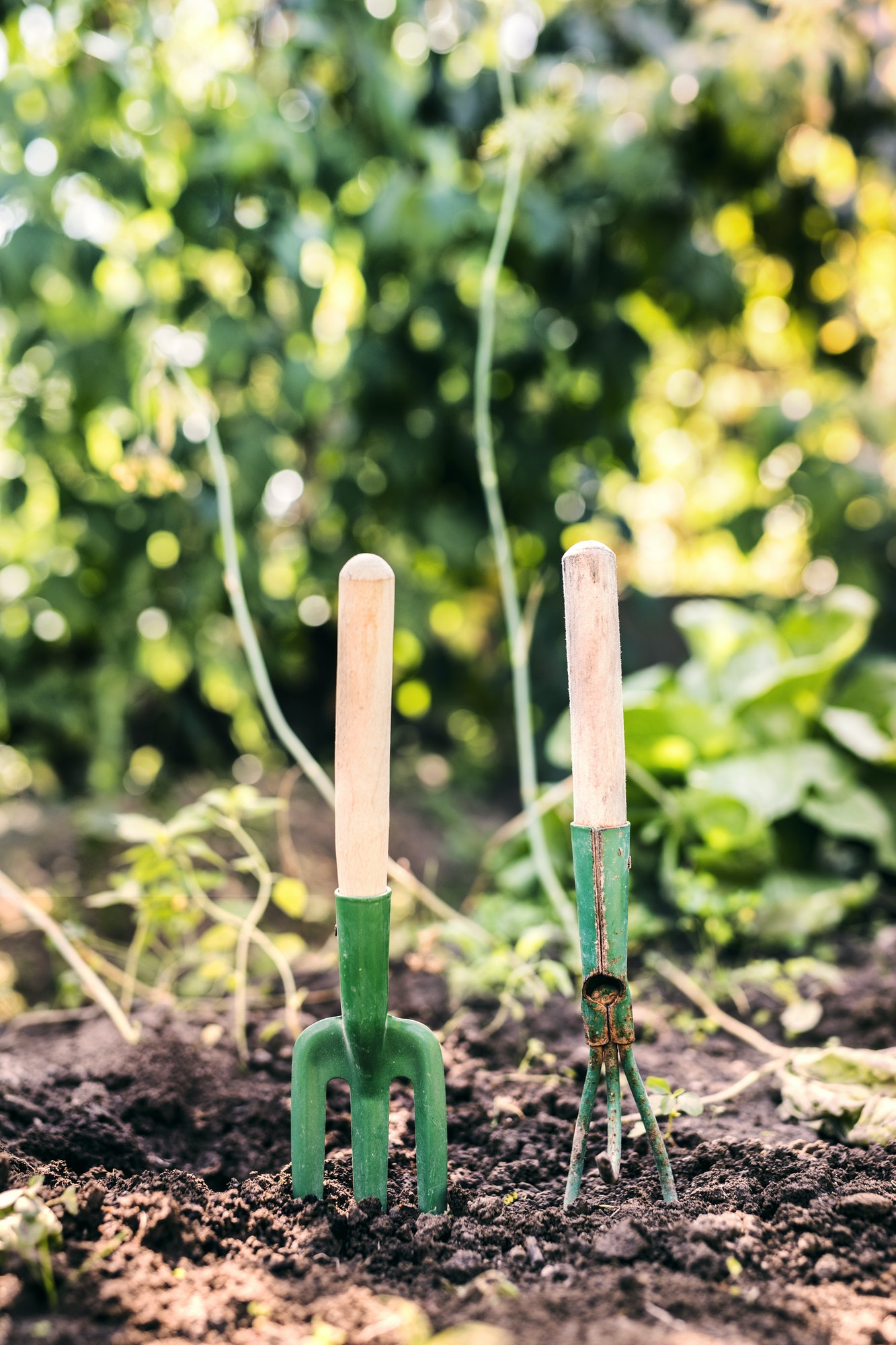 You've spent a few weeks dreaming about fruit, now. Each morning you stand in the place where your fruit tree sapling is planted. You can't wait to see that little sprig spring into a vibrant giant with heavily laden branches of edible delights.

As you sit among the vines and thorns waiting for the fruit tree to grow, you hear someone approaching. You stretch your neck to see above the weeds. Your new neighbor, Gary, is walking toward your garden haven. Though you're new to the neighborhood, you've met Gary once before. You've noticed his morning walks that sometimes stretch into the afternoon, depending on who he stops to talk to.

"What are you doing there?” Gary says. You dust yourself off and reach out your hand to shake. He glances down at your soil-covered palm and offers a fist bump instead. It distracts you from answering, so he rewords his question. "Why are you sitting in that wild patch of weeds? You're not some kind of nature worshiper, are you? We don't go in for that kind of thing around here."

"Oh, no. I'm just waiting to get some fruit from this little fruit tree," you explain, gesturing toward the ground. Gary steps closer and investigates the thorny patch.

“All you’re going to get from that is a rash,” he says. You glance down.

"Oh, no," you say. "Not that. There's a fruit tree that’s planted beneath all that stuff."

"Oh, right," Gary says, glancing around with a judgmental look that you don't much like. "Why'd you plant a fruit tree in this mess?" Gary asks. You know the answer to that one. You've spent long hours dreaming about the abundant harvest you'll enjoy.

"My ultimate goal is to have fruit," you explain. Your smile, you assume, communicates your air-tight plan.

“I— uh—” you stammer. You haven’t really thought about it.

"Apples are a buck thirty-two at Gerald's Groceries now. I told them that everyone was going to stop eating apples if they keep raising the price, but they didn't listen." Gary lets out an annoyed grunt. "Anyway, it doesn't seem fair that you'll have free apples while the rest of us have to spend our hard-earned money on overpriced store-bought fruit."

“I don’t know how much fruit to expect for the first season,” you say. “It might only be a little—”

“Seems kind of selfish,” Gary cuts you off. “If you’re just going to grow a bunch of fruit and keep it for yourself.” You don’t have a response.

"Alright, I guess I'll just keep getting my apples the old-fashioned way," Gary says after a long awkward moment of silence. "See ya."

You hardly hear him leave. You’re thinking about your goal. You were so excited about coming to an understanding of the garden’s purpose, but now you’re questioning everything all over again.

Certainly, Gary's manners could use some work, but his questions have unearthed something you haven't thought of. Why do I want fruit? Your thoughts wander. Is it ok for my goal to be enjoying the fruit, or am I just being selfish? You sit and ponder these questions as the sun rises hot overhead. Before you know it, your phone is in your hand and ringing.

“Isn’t it selfish for my ultimate goal to be fruit?” you ask. Aunt Loola laughs.

“Who told you that?” she asks.

“My neighbor came by and accused me of being selfish if I don’t share.”

“I’ve got a neighbor just like that,” Loola says. “I call him gossiping Gary.”

"Wait," you say, surprised. "Gary is the name of the guy I'm talking about."

“What street do you live on?” Loola says.

"Well, at least I have one good neighbor," she says with a laugh. “I’m on Maple.”

“Ok, back to the point," she says abruptly. “Don’t worry about Gary. He would have voted for the communists.”

“Communists don’t do elections, do they?” you say.

“That’s kind of my point. He won’t work in his own yard, but he’d be happy to take whatever your yard grows.”

“Ok, forget Gary. What he said made me think that maybe it is selfish to make abundant fruit my goal.”

"Honey, I can tell you when a garden really grows, it makes you generous."

“How many serious gardeners do you know?” she asks.

"None," you say but then change your answer. "Well, does knowing you count?"

“You don’t know me yet, but yeah. I’ve known good gardeners all my life. You know what their favorite thing to do is?” she asks.

"In the growing season, they are always sharing what their garden grows. When bright, juicy tomatoes, ripe figs, or plump plumbs bud bursting from those sagging limbs, you'll have so much fruit you couldn't eat it in ten lifetimes. The first thing you'll want to do is find more mouths to try what sprouted from your soil. The first thing you'll do is share."

“Probably not with Gary,” you say.

"Don't worry, Honey; gardening is the opposite of selfish."

In the last section, I made the claim that the ultimate goal of your Christian experience is to have abundant life. Abundant life is a life filled with the fruits of the Spirit like love, joy, peace, and the rest. There will be those out there that will complain. They will say, "It seems selfish to make your goal an abundant life."

I’m going to defend your purpose of abundant life by appealing to the highest authority.  God wants you to have abundant life as a Christian. It’s one of the main reasons that He sent his only son.⁠1 Though, you might still ask, “why?” Why does God want me to have an abundant life? There are a few reasons.

We can illustrate why with something you've probably noticed. Basically, every ad campaign since the beginning of advertising is based on this concept, from Apple products to camping equipment. Commercials selling these items are packed with happy people having the best time they've ever had. When you see people having a fulfilling and enjoyable time, you will be attracted to the products that make it possible. You'll ask questions like, "how do I get the same fulfillment." The advertiser is ready to supply you with the answer for only $39.99 a month.

Imagine the opposite for a second, though. Envision a commercial with people who are angry, bitter, and dissatisfied. How much product do you think that ad campaign will sell? Not much! Frustration, contempt, and discontentment are common feelings. Potential customers don't want to feel these negative emotions, and they will stop at nothing to avoid them. If you, as a Christian, are dissatisfied with your life, it displeases God. It's a wasted opportunity. It's a failed ad campaign. He wants you to be fulfilled so that you can bring others toward Him.

The greatest evangelistic method you can employ is to have an incredibly abundant life. Jesus put it this way, by this, everyone will know that you are my disciples if you love one another.⁠2 Notice that it doesn’t say that others will know that you’re saved, but that they will know you are a disciple. There’s a big difference between salvation and discipleship.⁠3 Love is one of the fruits of the Spirit. Love for one another is one of the marks that we are experiencing abundant life. That love for one another will signify to outsiders that you are Jesus’ disciple. Since the world is so packed with rivalry, bitterness, and hatred, your love will signify that Jesus has a better and more fulfilling way of life for those who follow Him.

I had a friend who used to say, "when you get squeezed, the truth comes out. When you hit trouble in your life, your true character oozes from you." He proved the statement true when he got skin cancer. I talked to him about his terminal diagnosis not long before he died. He said, "Man, if the Lord takes me, then great! It's been a wild ride!" He talked about his impending death with a smile, excitement, and joy.

Something beautiful happened at that moment. I wanted what he had. He was satisfied with his life. He was happy to go home to be with the Lord. It made me want that same kind of abundance.  He was a fantastic ad campaign for the Lord.

It'd be easy to think that abundant life is a lack of trouble, but it's quite the opposite. God wants to use your character as a billboard for his life fulfillment program. That means that God may just allow you to experience trouble so that you can demonstrate how satisfied you are in Him. When you find fulfillment in Him, even in the midst of suffering, it will draw other people toward the never-ending source of life and peace.

So when that co-worker hurts your feelings, if you respond with love, patience, kindness, gentleness, and self-control, and they know that you're doing that because you're a Christian, then you are demonstrating a very attractive kind of abundance. That's a successful ad for the Lord. I'm not saying that means a person will suddenly realize they need a relationship with Christ, but it's another sliver of evidence that they do.

Another reason God wants you to have an abundant life is that it glorifies Him. God is glorified by you when you are satisfied by Him. It's one of the greatest proofs that you are in communion with your creator. None of the gods of the ancient pagan religions have ever satisfied those who worshiped them. None of the methods of legalist religion can do it either. Nothing in the world can satisfy except the creator. That's why the Bible says so many times that the Lord is my portion.⁠4 When you're satisfied by God's abundance, it glorifies Him.

In addition, God wants to reward you. It's kind of crazy that not only does He want to reward you here and now for your obedience to Him, but He wants to reward you for it when you arrive in Heaven.⁠5 That’s why the writer of Hebrews says that He is a rewarder of those who diligently seek Him.⁠6 Those who seek the Lord and find abundant life in Him will also be rewarded for it in the next life.

Is God your portion? Have you found fulfillment in Him? When struggles and trials come, do you ooze Godly character? Are you satisfied, content, and enjoying your Christian life? God wants you to. In the next chapters, I'm going to tell you how to begin accomplishing this abundant life.

3 If you would like to know more about the difference between salvation and discipleship, I’ve written a book on the subject. It’s called Salvation and Discipleship: Is There A Difference?

5 If you would like to know more about eternal reward, I’ve written a book on the subject called Eternal Rewards: It Will Pay To Obey