A chapter from
BY Lucas Kitchen 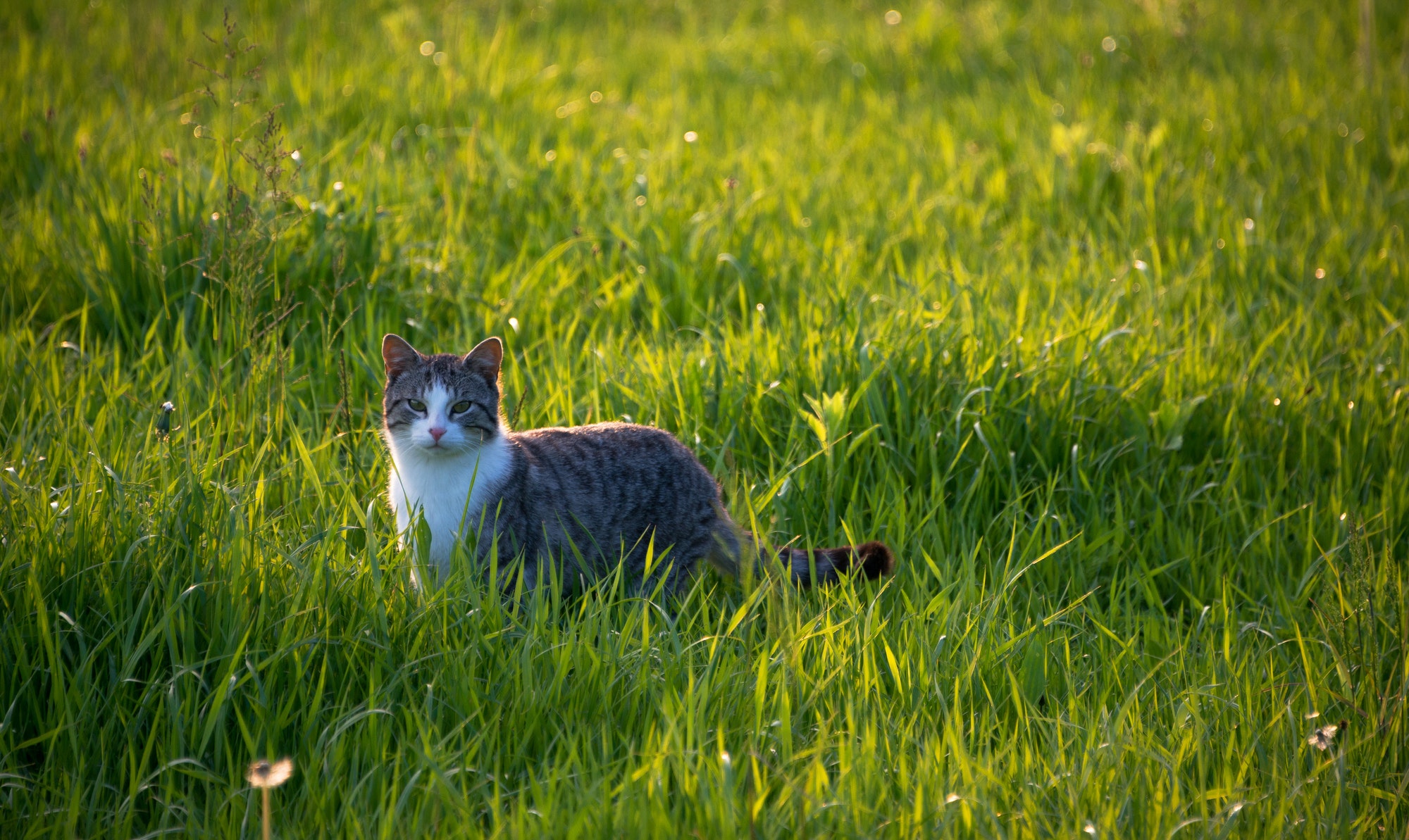 Grandma and Grandpa lived in Dallas. Our trips there often came in winter since the most active concentration of holidays accompany the cold weather. We would draw shapes in the fog our breath made on the van windows as we drove.

Being a kid who lived hours from my grandparents meant I was probably more attached to my pets than my parent's parents. We, the brothers, would rush from the van on return home in a mad competition to see who would first give Leo, our cat, the boyish affectionate aggression to which he was accustomed. Leo had endured tremendous tribulation under the iron hand of our villainous triumvirate. Aluminum foil hats, rubber bands on the paws, and pillowcase kidnappings were some of our favorite tortures that we inflicted upon him.

Leo was the best kind of cat. He was big and unthreatened by our boyish antics. He endured each of our loving experiments without bitterness or contempt. He was always ready for some lap time, a scratch, or a bedtime snuggle.

By the time the wheels hit the end of the driveway, the side door on our blunt-nosed Nissan van was already sliding free. The brothers and I fanned out in an eager search party for our black-furred companion. A short search was all it took before we lost interest. Cats can hide for weeks in a cinder block. No point wasting sunlight. If Leo needed some solitude, we'd leave him to it. It was nearly lunchtime, so our attention was quickly steered toward the fridge.

After carrying my coat to my room, removing my shoes, and reacquainting myself with my Lego collection, I returned to the kitchen to await the mid-day meal. I crawled into the bay window seat next to Levi when I noticed both of my brother's staring in Mom's direction. She was standing at the stove, warming a pot of tomato soup. Tears were streaming down her face. My brothers and I looked at each other, not sure what to do. I was the designated club spokesperson for our three-member group, so I got up and approached.

“Mom, why are you crying?” I said cautiously.

"Go out and ask Dad,” she said. I looked back to the brothers as we all shuffled to the door. A perimeter search revealed that Dad was in the backyard, shovel in hand, digging a hole. A small but growing pile of red clay sat next to the depression where he was working.

We had a neighbor at the time who was about eighty years old. She had smoked heavily all her life, and her health was failing. Since my brothers and I had often played with her grandkids, my parents felt the need to prepare us for Mrs. McCullough's soon expected death. They did this with periodic talks about mortality. They had explained that Mrs. McCullough was elderly, and death is a natural part of life.

With these discussions still ringing the bells of my mind and the shovel in Dad’s hand, I began to piece together the puzzle. As I watched Dad lift each shovel full of dirt from the ground, the truth dawned on me. Mrs. McCullough had died, and Dad was digging a grave to bury her in our backyard. I was sure of it.

I spent my free time playing in that backyard, and it caused all kinds of prickly emotions to think of Mrs. McCullough laid to rest beneath my active feet. "Are you going to bury Mrs. McCullough there?” I asked. I was not so much asking whether he was going to bury the neighbor in our yard, but why he had to do it where we played.

"No, Son. Of course not," he said. He struck a few more shovelfuls before the hole was complete. Mrs. McCullough would certainly not fit. There must be some other reason. Although he had no tears, he was reluctant to fill us in on why he needed to dig. After a resolved sigh, he speared the shovel into the dirt and turned his attention to his three clueless sons.

"Mr. Jones came down a few minutes ago." Dad said. Mr. Jones was the father of our best friend in the neighborhood named John. He had volunteered to feed Leo while we were out of town. Dad gestured to a shoebox I had not previously noticed as he continued. "He came down to feed the cat and found him dead next to his food bowl."

Lance, the oldest, understood first. His sobbing began the chain reaction. In seconds our faces were streaked and our shoulders bounced with rhythmic weeping. "Mr. Jones said that he found a dead bee lying next to Leo. He thought that Leo may have been stung and was allergic." Dad reached for the shoe box and stepped toward the tiny grave he had prepared. Lance was the first to speak.

“Can we pet him one last time?” Lance bellowed between sobs. A dad’s desire to give solace to his sobbing sons is strong. He pulled the lid from the box and held it out so that we each might stroke our feline friend one final time.

"Ahh, why is he hard?" Lance said as his hand grazed the lifeless body that felt like cold stone. He recoiled at the sensation, but then reached in for further inspection. Apparently, Mr. Jones had stored Leo in his deep freezer as a preservative until we returned from our trip. That lit off another powder keg of wailing. We each reached in eagerly now as much out of curiosity. We stroked the cat-sicle for a brief moment before Dad decided that it wasn't helping.

We watched as Dad piled dirt on top of Leo's chilled corpse. We made a poorly crafted cross to serve as a grave marker. We went in to eat tomato soup. We sat around the table crying. We had met death and the meeting left us all feeling frigid.

It was around that time that I realized I was going to die. The relationship between the cold cat case and my understanding of impending mortality is unmistakable. If it could happen to Leo, it could happen to me. Someday, possibly soon, I would be placed in a deep freezer while my hole was being dug, or at least that is how I imagined it. I began to think often of death. Deep stabbing questions grew like stalactites in the icy cave of my mind.

What happens after I die? I thought. I thought of the moment I had heard the gospel at Dad's drawing table. I had believed, but would that be enough? Wasn't there something I was supposed to do? I was looking for a sure way to hedge my bets on eternity. I needed assurance. How could I be sure I was saved?

“Do you want to go to Todd’s church this evening?” Mom asked one Sunday afternoon, phone held to the side of her head. The winter days were giving up their chill to the spring thaw. The memory of Leo was still vivid, but its chilly sting had blunted. Todd was the kid who lived next door. I’d never been to his church. In fact, it hadn’t even occurred to me that he and his family attended.

"Uhh, yeah, I guess so," I said, not quite sure what I agreed to. Todd was more popular at school, and I was happy to have the invitation. I was intimidated to imagine what I would see there. Their baby blue minivan stopped in front of the house about fifteen minutes later.

Their church was not like the little Bible church my family attended. Theirs had a pipe organ, red velvet pews, and a tall stage-bound pulpit made of some dark engraved wood. The ceiling was so high the room could have had clouds. Todd seemed bored, but I was mesmerized. The pipes echoed in the room and vibrated the brass chandeliers. The organist's hairdo could have housed at least twelve squirrels, but they would have been unhappy with the way it wobbled while she played. The preacher hollered as if the entire congregation was hard of hearing, even though he had a microphone that worked just fine as far as I could tell. That night I was introduced to what I'd later come to know as an 'altar call.' The service ended with the suited man passionately begging his listeners to get their sins forgiven.

Are my sins forgiven? I wondered. I had believed what my Dad had told me at his drawing table a few years earlier, but I couldn’t remember asking for forgiveness. I pondered what I had seen and heard on the drive back that evening. I returned home with more questions than answers.

"Lord, please forgive me for my sins." I started to pray like a mantra as I laid in bed. I repeated it every night. I still remember the mental image that came when I would pray this. I was moving down a road. On the side of the road was sign after sign. Each one said, ask for forgiveness again. No matter how far I traveled down this road, there were more signs. I could see them in the distance stretching over the horizon. I felt trapped. Nightly I begged to be absolved, but the weight of not knowing whether I'd been forgiven was heavy.

This sinister fear sprouted quickly from somewhere deep within. I seriously doubted that my sins were forgiven. Thus I prayed more passionately each night repeating the phrase like a rosary. For months, maybe even years, I begged God for forgiveness. I was mortified of facing death without having righted my sin problem.

The doubt sunk its black roots into my soul. I believed that Jesus could forgive me, but I was afraid that I hadn't prayed the prayer right, or I didn't mean it, or if I meant it, I didn't want it bad enough. Viney tendrils of fear followed the fractures downward and did their best to soak up any living water in the well of my being. No matter how hard I prayed, I doubted more and more.