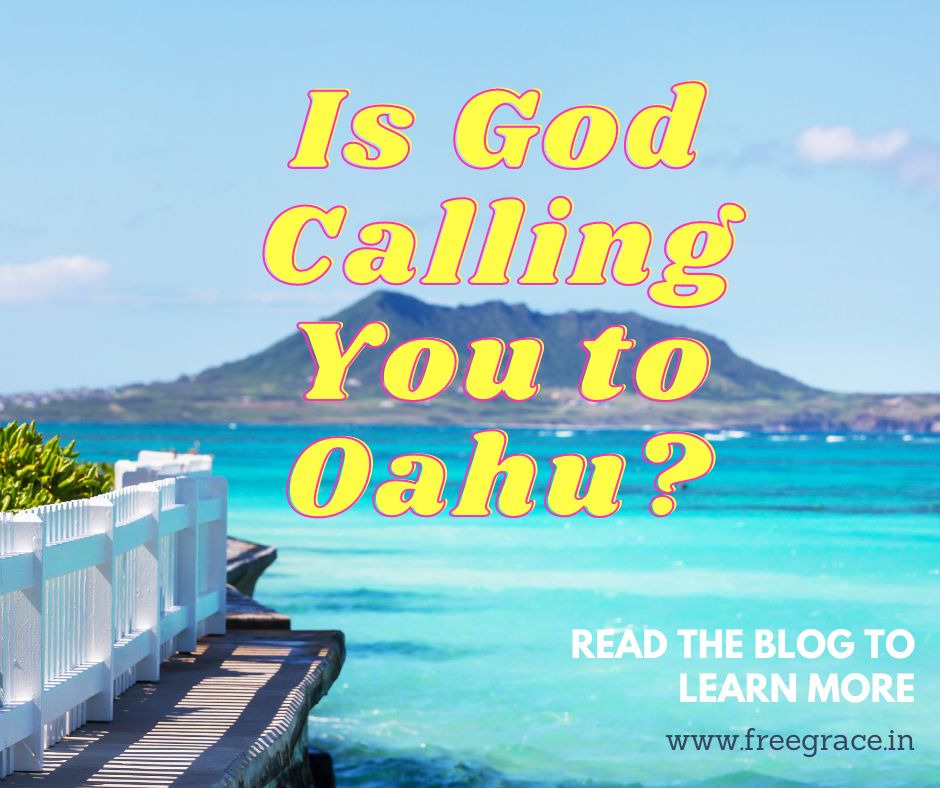 Are Any Free Grace People Willing to Relocate to Oahu?

Do you know the difference between religion and faith?

I’ve heard it explained using the life of Abraham.

Abraham was a religious man living in a religious society filled with idols. His family were idol worshippers (Josh 24:2). Then one day, God spoke to him:

The Lord had said to Abram, “Go from your country, your people and your father’s household to the land I will show you…” So Abram went, as the Lord had told him… (Gen 12:1, 4).

In sum, I’ve been told that the life of faith is one of call and response to the living God. You can be a very religious person and never do that.

With that in mind, over the last year, I’ve made some contacts with Free Grace people among the Pacific islands. For example, next week, Lucas and John will go to Vanuatu to encourage pastors and solidify a Free Grace movement in that area.

And last week, a brother from Hawaii reached out about the need for Free Grace churches there. As he wrote:

“Over 150 years ago, Christianity started in the Pacific region in Oahu, and then established its churches and missionaries on the other Islands…in the hundreds. Of course, these Christian missionaries are Calvinists and Arminians, in different religious groups and cults.”

So while Christianity is on the islands, they aren’t necessarily clear on the saving message.

“If the Lord has directed you to help Free Grace believers spread the truth and stop the confusion from other religious sects, then now is the time to do it.”

I’ve exchanged emails with this brother before. He’s doing what he can to share grace in Hawaii, especially by sending out tracts and other materials. But he feels hampered because he lacks ministry credentials:

He's fighting the good fight. But he also knows his time is limited:

“I'll be 62 this April and still in very good health and healthy at my young age at 62, and my desire is to start moving on this and get things moving…I can go out in the streets like I did before and pass out tracks in Waikiki, but if we don't have a church or a place to have Bible studies about Free Grace Theology, then game over.”

In other words, he’d like a core group of believers to build ministry momentum.

Any regional Free Grace movement will begin with believers who meet together, function as a body, and reach out to the society around them. That last part is key. As my friend, Bud Brown, recently wrote, “I can say, with one exception, that in my experience all churches growing by conversions are intensely mission-focused.” Growth requires a missional mindset.

So here is my question to you—

Are there any readers in Hawaii who have Free Grace contacts there, especially in Oahu? Do you feel called by God to go to Hawaii? Are you a retiree—even a retired pastor—who can just as easily live there? Are you a college student with a concern for ministry who can study in Hawaii? Is there a married couple with a gift for showing hospitality? Are you willing to host a meeting in their home? Is there a family who works from home and who can relocate to Oahu? Are you someone who wants to be part of a new work in a place that is starved for grace? Is God calling you to Hawaii?

Lucas and I have dreams of planting churches. We talk about it often. That isn’t something we can take on right now—at least, not directly. But we recently discussed this idea:

With the help of our partners, I think we can realistically get the first two steps on that list accomplished in 2023 and grow it from there.

For now, I’m glad to be a cheerleader for all my brethren who have responded to God’s call by preaching grace in their neighborhoods. After all, Jesus expresses Himself through every member of His body all around the world.

Send your questions or comments to Shawn.