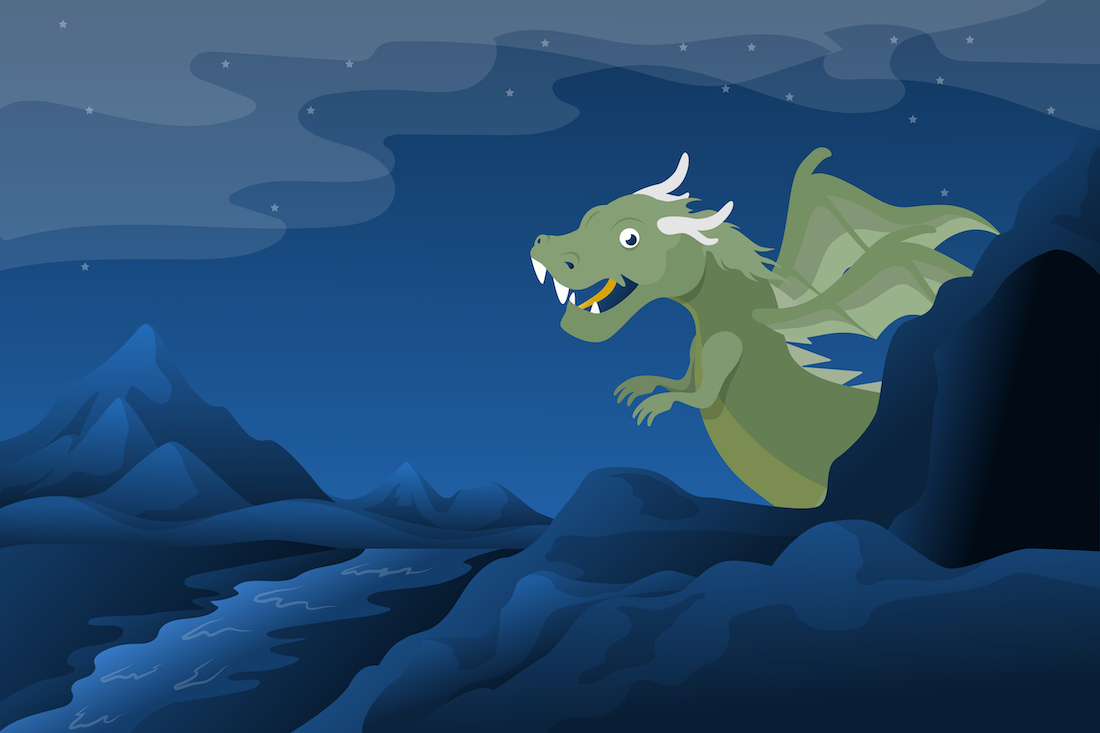 “Oops,” Ellie said. “I didn’t mean to say that. Slurp hurried purring burp.” Ellie frowned and put her hand over her mouth. Through her fingers she said, “I keep saying things I don’t mean to say. Sort the tort for a short wort.”

“It’s your Baffle dragon.” Eloy explained. “He’s casting a confusion spell on you. It’s the same thing that happened to Wizard Wobblewog. Quick! You need to believe in Draconus so you can—“

“Wailing wallop beans, It’s the two toads of turtle pass,” An old grumbling voice said. They both turned to see Wizard Wobblewog walking up the path behind them. Between each of his crazy words, he was humming to himself. “Drippy drowsy round the town see fat fruit full of foggy critter’s feet.”

“No,” Ellie said. “I’m not.” She bit her lip and held her breath as wizard Wobblewog waddled up to them. Ellie look like she might burst from holding her breath in. Her face was turning red and her cheeks were blown out like balloons. She couldn’t hold it any longer. “Fuzzy wump thrumming under other ugly usher’s lumps.” She looked down and hung her head. “It’s no use, tooth booth. I can’t help it, spit a bit of grit on a mit.”

“Listen,” Eloy said. “Both of you have to believe in Draconus. Once you believe you can ask him for help no matter where you are.”

“Believe?” Ellie said. “What does believe mean? I seen a sheen on a green bean.”

“Believe means,” Wobblewog shouted. “It means—“ He put a finger in the air and squinted his face up really hard until his nose was covered in wrinkles. “Believe means—“ he looked like he was about to tell something that made sense. He said, “Crusty busted mustered thruster fusses up a husk.” Ellie and Eloy both groaned.

“Look at the note,” Ellie said and then added, “Float a boat on a goat with a rope with no hope.”

“Oh no,” Ellie said before adding, “Show a moan to the grown loan.”

“We’re never going to figure it out,” Eloy said dropping his hand with the note in it to his side. “If you could just believe then you could ask Draconus for help.”

Ellie said, “Can’t you, new shoe poo.” With that Eloy’s eyes got wide and a smile stretched across his face.

“You’re right,” Eloy said. He spun around in place, took a deep breath, and let out the biggest, loudest shout he could. “Draconuuuuuus!”

Whoosh, came the rush of giant dragon wings. Eloy stepped back as Draconus landed at the peak of the mountain and buried his giant claws in the rock. Eloy spun around and pointed at the massive green dragon and said to his sweet sister sprog, “See!”

“What?” Ellie asked before she added. “Pluck a stuck duck.” She squeezed her hands on the sides of her head. “I don’t see anything.”

Eloy looked from Draconus to Ellie then to Wobblewog. The old wizard was mumbling something to himself about shoe laces and chewed bubble gum. Clearly, the wizard couldn’t see Draconus either. Eloy turned back to the big green dragon.

“They can’t see me until they believe,” Draconus said in his big warm voice.

“But what does it mean to believe?” Eloy asked.

“Believe means that you know something is true,” Draconus said. “Do you know for sure that the sky is blue?”

“Sure is,” Draconus smiled.

“So how do I make them believe,” Eloy said.

“You can’t force anyone to believe,” Draconus explained. “But you can try to persuade them, to convince them, and to help them believe the truth.”

“Ok,” Eloy said. “I’ll try.” He turned toward Ellie and Wobblewog who were both muttering to themselves. “Draconus is here and he wants to help, but first you have to believe in him.”

“Draconus,” Eloy said. “It’s not working. Isn’t there something you can do?”

“Actually there is, but it might scare you,” Draconus said. “Are you sure you want me to help?”

“Yes,” Eloy said. “I’d do anything to get them to believe, so that you can help them like you’ve helped me.”

Without saying another word Draconus opened his mouth so big a house could fit inside. A rumbling sound thundered from his belly. A bright orange flame rose up in his throat. From his mouth poured a river of fire and smoke. It scorched out at Eloy in a blazing wall of burning brilliance.

Eloy ducked down thinking he was going to die from the flames Draconus shot at him. He had been hit by his old Baffle dragon’s flames many times, and that had always hurt. But, Draconus’ fire didn’t hurt Eloy at all. It tickled and tingled and made him feel warm.

“Oh, wow,” Eloy said, looking at his hands which were glowing with fire. “Neat.”

“Ahhhh!” Ellie screamed. She was pointing at Eloy’s head. “Your hair. It’s on fire! Liar a tire spire.”

“The boy do burn,” Wobblewog said. “Alike a flame I once…” he trailed off before adding, “Crane shame a blame game.”

“It’s ok,” Eloy said running his hand through the fire that was burning on top of his head. “It doesn’t hurt. It’s Draconus’ fire. He gave it to me to help you believe in him.”

“He’s real?” Ellie asked. She stepped forward, put her hand over Eloy’s head, and ran her fingers through the flames. She giggled at the funny feeling. Then she repeated her words, but it wasn’t a question this time. “He’s real. He’s real! I believe he can save me from my Baffle dragon. And I’m not saying silly things anymore.”

“I’m cured!” They celebrated for a few seconds before they gave their attention to Wobblewog. They both looked at the old wizard. “What about him? Is he cured too?” They watched him for a few seconds.

“A musty buster busted a crusty mustard,” Wobblewog said. They knew he hadn’t been cured. They both turned to Draconus, who Ellie could now see.

“For him,” Draconus said, “It will take more to convince.”

“What should we do?” Eloy asked.

Find out what Draconus tells them to do in the next chapter of Dragon Tales.

What did Eloy learn about the meaning of the word believe?

Eloy learned that believe means to be convinced that something is true.

Did you know that in the Bible believe is a very important word. It means the same thing in the Bible that it did in our story. It means… (have kids repeat the meaning)

What did Draconus do to Eloy to help Ellies believe?

Droconus lit Eloy’s head on fire with flames that didn’t hurt so that Ellie could see and believe.

This is kind of like how God let the Jesus do miraculous signs so that people could believe in Him.

Jesus did many other [miraculous] signs… that you may believe that Jesus is the Christ, the Son of God, and that believing you may have life in His name. (John 3:36)

What is the reason Jesus did miraculous signs?

To prove he could give us everlasting life.

What do we have to do to get everlasting life?

We get everlasting life by believing in Him.