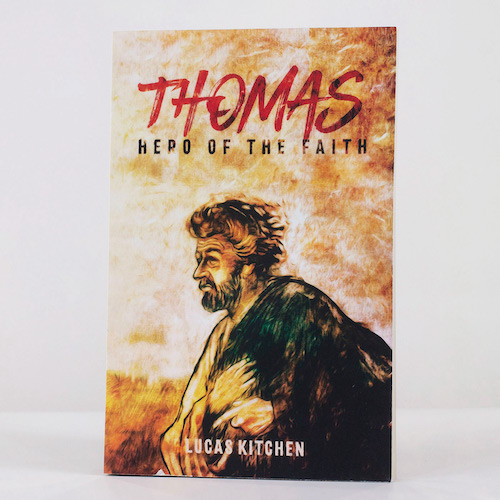 There is one apostle remembered for his doubt. Though, very few seem to remember what Doubting Thomas did to overcome his mistrust. This book follows Thomas' journey from the moment of his salvation to Jesus' post-resurrection appearance. Thomas: Hero of The Faith combines personal stories from the author, a biographical sketch of the apostle Thomas, and modern application. This short easy-to-enjoy book will give its readers effective weapons they can use in the fight against their doubt.

A chapter from Thomas: Hero Of The Faith by Lucas Kitchen 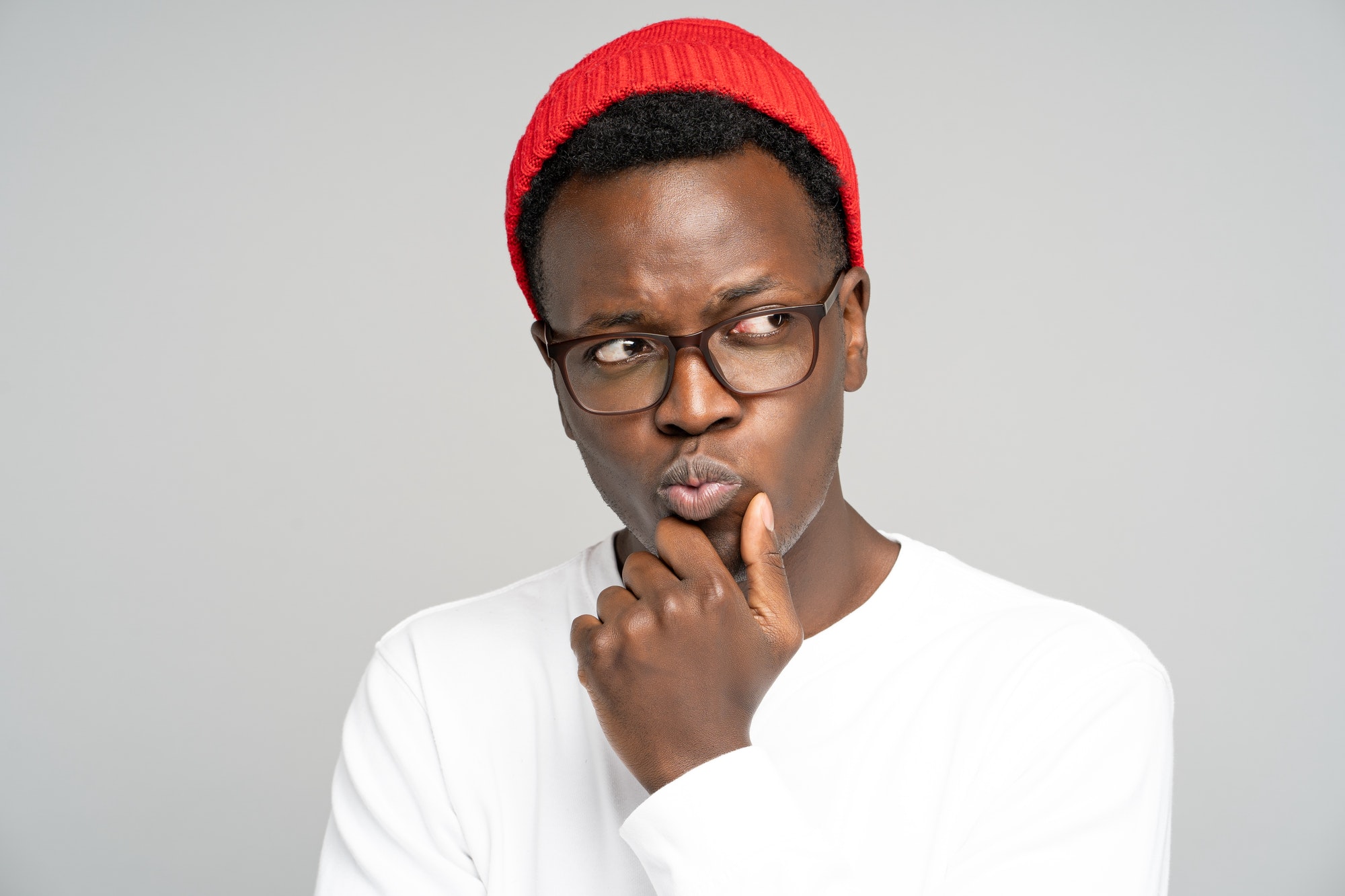 Once there was a woman who spent years attending Sunday services. In fact, she worked on the secretarial staff at a Bible teaching church. She heard sermons about Christ on a regular basis. She had often edited text for church publications which focused on faith alone in Christ alone. After many years in this environment, the pastor gave a sermon in which he encouraged his listeners to consider what they believe about Jesus. She was in attendance that day, as she realized quite abruptly that she had never believed in Jesus for salvation.

She had not been resistant to the idea, but she had not realized that it was all about what she believed. About that moment, she later said, “I didn't realize that I just simply had to believe in Jesus to save me. It was not about what I could do, but it's all about Jesus and what he did for us!” To the surprise of the church staff, she announced one day soon after that she had believed in Jesus for salvation.

Not everyone’s salvation experience is an emotional one, but it was for her. She was excited when she recounted the story to me. She said, “It was awesome! I wish everyone could experienced how I felt then!”

She was encouraged to consider whether or not she believed in Jesus. In a similar way, at a few different times in the Gospels, Jesus takes inventory of the faith of his followers. Thomas was present at each of these events and, no doubt, was effected by the conversations. In John 11, after telling her that He is the resurrection and the life, Jesus asks Martha the question, “do you believe this?” This gives her the opportunity to affirm her faith in Him.⁠1 In John 6 Jesus asks his disciples if they want to leave the ministry. That gives them the opportunity to tell Him that they believe in Him. ⁠2  In Matthew 16 Jesus directly asks his disciples what they believe about Him. Peter replies on behalf of the others by expressing their belief that Jesus is the Christ.⁠3

Since it’s Thomas that we are studying, you may wonder when Thomas got saved. We don’t have to wonder, since John recounts the exact moment in which eleven of the disciples, including Thomas, believed.  John chapter 1 shows that five of the disciples believed in Jesus the first day they met him. In the very next chapter  at least six more of his disciples believed in him. After Jesus turned water into wine at Cana in Galillee, John tells us this:

This beginning of signs Jesus did in Cana of Galilee, and manifested His glory; and His disciples believed in Him.⁠4

It was at the very first miracle that convinced them. Many people give Thomas and the other disciples a hard time, claiming that they were slow in coming to faith, but John seems to disagree with this. It didn’t take any more than a single, fairly minor miracle to bring them to faith. The Gospel of John later clarifies that it was all but Judas who believed in Jesus.⁠5 Just in case it’s unclear, a few chapters later John gives us another indication of what the disciples believed about Jesus.

In John chapter 6 Jesus gives a difficult teaching that runs a lot of his followers off. When a big number of his audience walk away, Jesus asks the twelve a very important question. Here is what was said:

From that time many of His disciples went back and walked with Him no more. Then Jesus said to the twelve, “Do you also want to go away?”

But Simon Peter answered Him, “Lord, to whom shall we go? You have the words of eternal life. Also we have come to believe and know that You are the Christ, the Son of the living God.”

Jesus answered them, “Did I not choose you, the twelve, and one of you is a devil?” He spoke of Judas…⁠6

Eleven of them had believed in Jesus for eternal life by this point. That is because they believe that Jesus is the Christ, the Son of God. You may be wondering how we know they are saved, since these verses don’t explicitly mention their salvation. Luckily we don’t have to guess since only a few verses before Jesus says this:

Most assuredly, I say to you, he who believes in Me has everlasting life.⁠7

In fact, this is not the only place that says it. John, throughout his Gospel uses, “believe in,” over thirty times. He uses it in a very precise way. When he reveals that someone “believes in” Jesus, he’s always talking about salvation. That’s how we know that the eleven disciples were saved by chapter two. It then reiterates that claim in chapter six.

Now let’s single out Thomas since he is who we will be looking at specifically. The stories that we will investigate in the following chapters come from Mark 3, John 11, 14, and 20. That means that  the rest of what we study in this book about Thomas happens after he was already saved. All of his doubts and confusion happen after he is already a believer. Those doubts arise even though Thomas has everlasting life that he can never lose. Despite his salvation, he still doubts certain things about Jesus.

That should give us pause. Often doubts are used by some to bludgeon others into questioning their salvation.  We need not take this approach. In fact, once we’ve received it, we need not ever question our salvation. Christ promises that our eternal life is secure once we’ve believed in him for it.⁠8 By the time we meet Thomas in the Scripture, he is not a person trying to find salvation, instead he’s a saved person trying to find his confidence. The following chapters will trace his attempt to overcome his doubt.

Jesus was diligent in presenting opportunities for the disciples to take stock of what they believed. Truly all people must consider the same question that Thomas and the other disciples faced. Before we move forward with this investigation of Thomas’ answer to the question of belief, it’s worth taking stock of your faith. Ask yourself:

“Do I believe in Jesus?”

A little self-examination can go a long way. Do you believe that Jesus will give you free eternal life?  That’s what it takes to be eternally saved. The simplicity of this verse explains as well as any in the Bible:

For God so loved the world that He gave His only begotten Son, that whoever believes in Him should not perish but have everlasting life.⁠9

Jesus is the giver of everlasting life which can't be earned, returned, or lost.  You simply must believe in Jesus so that you can have eternal life. Do you believe that? If you believe that Jesus can and will give you free eternal life, before you can even ask, you have it. If you believe in Jesus to save you, then you are eternally saved.⁠10 If you are not sure about your salvation, put down this book and pick up the Gospel of John to get clarity on the subject.

I sincerely hope you've already come to saving faith. If you have, the next question you may wish to ask yourself is this:

“Do I believe everything that the Bible says about Jesus?"

I've recently been talking with a man who believed when he was young. His faith in Christ for salvation is a done deal; it's a closed transaction. However, he often wrestles with doubts concerning a host of faith-related issues. Although he has believed in Jesus for eternal salvation, that does not mean that he has won victory over every daily doubt. That is similar to the situation in which Thomas found himself as we will soon see.

If you have salvation and believe everything the Bible says about Jesus, there is another question you may wish to ask yourself. That question is,

"Do I trust Jesus' guidance?”

Doubts have a trickle-down effect. Doubts about Jesus’s instructions will ultimately result in difficulty in obeying Him. If you doubt that Jesus’ commandments are good, it will be harder for you to follow those commandments. That is why doubts are so insidious. Daily obedience to Christ has nothing to do salvation, but it has everything to do with discipleship.⁠11 Salvation is a gift, but reward in Heaven is given out on the basis of obedience to Christ.⁠12 That’s why the writer of Hebrews says:

Therefore do not cast away your confidence, which has great reward.⁠13

It's so important to wrestle with doubts as soon as they arise because doubts corrode confidence, and confidence has a great reward. For one not yet saved, doubts may block the way of salvation but for those with salvation, doubts may  block the path to heavenly reward. For the believer who wants great reward in Heaven, facing doubts should be a priority. Confidence in what one believes is the goal. As we will see in the following chapters, it is what Thomas wanted, and it should be our mission as well.

Through Jesus’ ministry, Thomas became well-practiced at facing and overcoming his doubts. In the next chapter, we will begin to learn how he did this.

11 If you are not clear of the difference between salvation and discipleship, consider reading Salvation And Discipleship: Is There A Difference, by Lucas Kitchen.