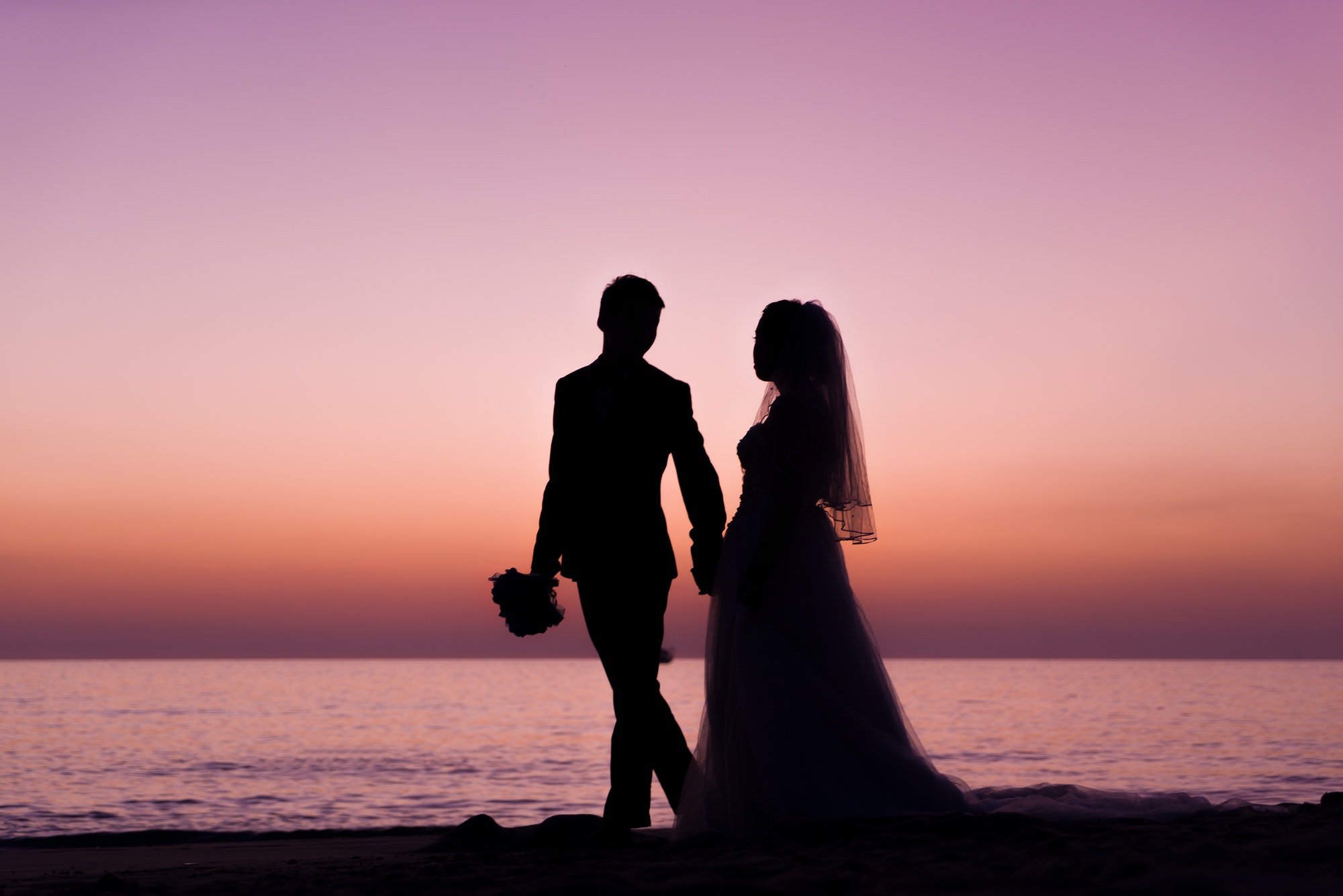 My wedding day began with me and my dad stealing a truckload of bamboo. Kristah wanted an arbor of greenery that we could stand under for the ceremony. Like always, I had waited until the last moment.

"There's some!" I shouted as we rolled down the road in Dad's truck. I hopped out, machete in hand, and began to slice at it like a chef set loose on grand stalks of celery. The bamboo robbery went unnoticed by the police. When my grandmother saw the arbor, my dad and I constructed, she said, "I just don't know why you'd want to stand under a bunch of dead sticks." Leave it to Granny-Ma to say precisely what she thought.

The wedding was in the middle of May. My wife says we got married on the fifteenth, but I'm pretty sure it was the tenth. The scene was set beautifully at Hunt Villa, dead sticks, and all. The Spanish style mansion that we rented filled with the aroma of Asian cuisine. Kristah's friend, Patra, owned Little Thai House downtown, so we hired her, a local legend of a chef from Thailand, to cook a wondrous assortment of Pad Thai: pineapple fried rice, chicken larb, and spring rolls for the reception. The gourmet meal was consumed in great heaping portions with much appreciation and awe.

I wrote my vows sitting on a rope swing in front of the mansion. Kristah and I had been apart for most of the day, longer than we had in weeks. The hanging swing was the location at which I would get my first glimpse of my bride to be. She snuck up behind me, though I knew she was coming for the entourage that follows a bride about on the big day. Her flowing dress glided across the grass gracefully. Her wedding gown hugged her attractive lines before billowing outward around her knees. Her stylist had drawn her hair back in an arrangement worthy of a princess at a ball. She was the vision of beauty and grace.

We kissed gently, trying not to communicate her red lipstick to my makeup-less face. The supposed privacy of the seminal moment was artificial since a half dozen of her wedding party and a photographer were lurking nearby. I found it incredibly awkward for the photographer to call out, "kiss her again!" I played along, not minding the kiss itself.

"This time tomorrow, we'll be on a boat to the Bahamas," she said, trying to see past the busyness of the anticipated day. For our honeymoon, we were taking a Caribbean cruise.

“Yeah, but we have to do one thing first,” I said.

“What?” she asked, knowing it was unlikely to be serious.

“We’ve got to lose all these Peeping Toms. I was thinking we could elope. We could head down to the Justice of the Peace. You already have a white dress on.”

"You're not going to get out of this that easy," she said with a smile. Transitioning smoothly to the administrative tasks every bride must balance, she added, "do you have down what you're going to say?" I held up my little notebook. I had just finished writing before she arrived.

I had been available but absent-minded during the planning of the wedding. Kristah would call on me for indifferent decisiveness when two shades of purple were proving too obstinate to choose between. I had never envisioned my wedding day, and therefore would be easily pleased by the occasion. There was, however, one thing that Kristah and I both wanted to have as part of our ceremony. Months earlier, we had concocted the scheme.

“You know what would be cool,” she had said with her wedding planning book spread out in front of her, along with a dozen fabric samples splayed across the kitchen table. She was wearing that old faded t-shirt I loved. “We’ll have people in from all over who are probably confused about the saving message just like you were.”

“I wonder if there’s a way we could use our wedding to help them,” she said.

"Ohh, yeah. Good idea," I said, now reveling in the rare moment of inclusion in the planning process. "I've got it!" With a dramatic tone, I leaned in and asked, "What do you want the first thing we do as a married couple to be?" She smiled deviously. "No, not that. I mean, the very first thing.”

"Oh, yeah!" she sang with delight, following my train of thought. We both cooed from the joyful impatience of the burgeoning idea. Though the plan for fabrics, and cake, and venue shifted multiple times before the day came, this secret plan was one aspect we both clung to, telling no one except Russ, the minister.

Now that the day had arrived, I was nervous. What we were going to do was unconventional. I'd never seen anyone do it, though I knew if there is one day a man can get away with saying almost anything he likes, it is the day he is the groom.

"I now pronounce you man and wife," Russ said. The audience clapped, not quite expecting what came next. "Kristah and Lucas have something they want to share with you." He handed the mic to me, and I turned to the audience.

“My wife and I,” I said, throwing a sideways glance at Kristah. The excitement of the word wife was like electricity on the tongue. "We have imagined all of the marvelous things we will do together once we're married. Though we wanted to start right, we want the very first thing we do as a married couple to be sharing the Gospel with those we love. Since I have a microphone and a very captive audience, that’s what I’m going to do right now.

"For years, I thought that salvation was a free gift, but somehow also requires good works. Is eternal life free, or is it costly? The quest for that answer drove me deep into a barren wilderness. I wandered dryly in the desert following the footmarks of those who went before. I suffered isolation in the wild, but I clung to the path etched in the dry ground. I wanted an answer. I longed to rest. At the moment when I was ready to give up, a fellow traveler arrived and pointed to the distant horizon. I protested weakly, holding to the mysterious footprints I followed. She showed me that the complicated patterns in the sand were nothing more than my own tracks layered upon each other. I had been walking circles. I would never find what I was looking for on that path. God used Kristah to lead me out of the wilderness into this beautiful oasis I've named clarity. What I've come to see is simple. Salvation is as easy as believing and as free as a spring of living water in the desert.

I looked across the audience of family and friends. People stood around who I loved and admired. Nearly all the people I had ever loved, experienced loss, and been confused with were gazing back at me at that moment. Some of them had contributed to my confusion; some were the ones who helped bring me out. Would they understand what I just said? Only time would tell. I didn't want to linger too long within that moment, but I hoped that we had planted a seed. Finally, I raised the mic. "Now, let's party!" I said as I handed the microphone back to Russ.

As we walked down the flower-covered aisle, he said, "It's my pleasure to present Mr. and Mrs. Lucas Kitchen."