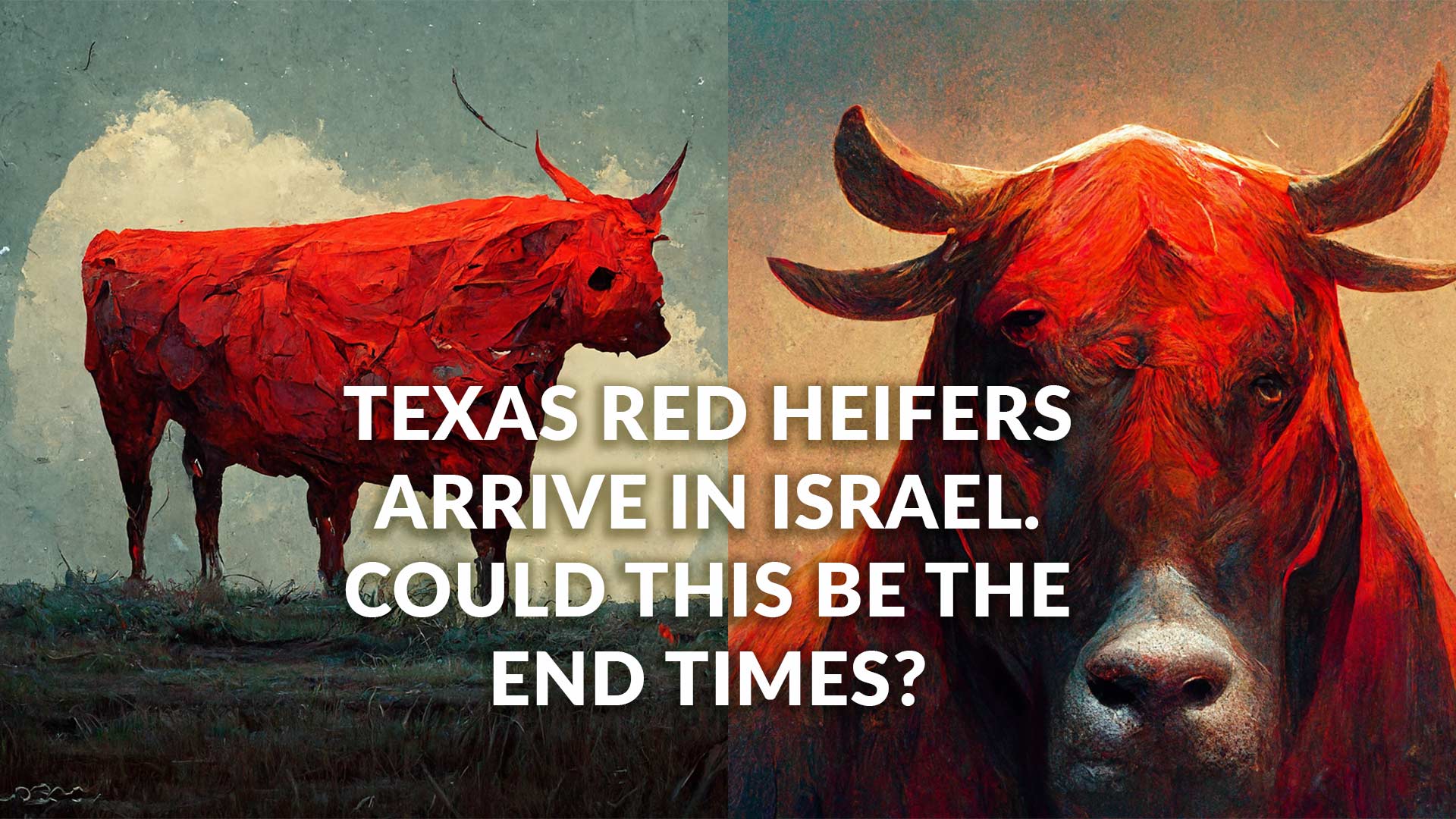 Red Heifers Arrive In Israel. Could This Be The End Times?

Five red heifers arrived in Israel last Thursday, and it all has to do with Texas. In this video/podcast episode Lucas Kitchen will explore the story of the red heifer and what significance it has for Christians today. He will also look at Romans 11:25-27 for guidance on what this all means.

What’s the red heifer all about.

As you may know, the red heifer, basically a cow with red hide is required for the practice of traditional Mosaic law in Israel. The red heifer is used to create the water of purification. There are some technicals according to Numbers 19, but the gist is this. Without a red heifer, the temple system is dead in the water.

One tiny problem. Red heifers are incredibly rare. Rabbis estimate that only nine of them were ever found and used in two eras of the temples in Jerusalem.

Of course the next temple (they call it the third) is still waiting to be built, but many of the implements, and instruments for temple worship have already be made. Five hundred men with the right lineage have been trained to perform priestly duties. There are plans to build another temple on the Temple Mount. Of course it’s complicated because the al-Asqa mosque and the dome of the rock occupy much of the real estate, but there are plans that make a shared space a real possibility.

Red Heifers Are As Rare As Hen's Teeth

However, without a red heifer there’s no kosher way to jumpstart a new temple even if it were built. It’s like having a car, and the red heifer is the key to start the ignition.

So about a decade ago the search for a red heifer began in earnest. Many cows in Israel were inspected, but there wasn’t any viable option. So the agency that was searching began looking abroad. There’s no rule that says the red heifer has to come from Israel, or from a Jew. In fact, there’s rabbinical stories where a red heifer was bought from a non-jew.

On A Texas Ranch

Now, this is how this becomes a Texas story. And I’m so proud to be a Texan. A group of Texas ranchers who happened to be Christians got wind that a red cow was needed. “A Red Cow to help Israel, Now that’s something we can do.” That’s the Texas can do attitude. A group even took out ads that other Texas Ranchers would see, and the word spread. The ads encouraged Texas ranchers to set aside any red heifers that were born to their herd.

There was an obvious problem though. One of the requirements for a red heifer to be the red heifer is that it had to have no blemish. That’s a tall order in Texas, since Texas law requires every cow or bull born in the state be marked with an ear tag. That constitutes a blemish.

COVID Was The Key

Now here’s where the story takes an interesting turn. At the height of the COVID pandemic many people were not coming in to work. A certain Texas rancher reports that a group of five red heifers were born in one litter (an incredibly rare occurrence within itself), more amazing still since it was during COVID, the employee who normally puts in the ear tags didn’t come in to work that day. So these five red calves remained unblemished.

When they were about eight or nine months old, rabbis were called to inspect them. It wasn’t long after that a group of Israeli Rabbis from the temple institute showed up in Comanche Texas to inspect a sibling set of red heifers. Apparently they passed the test, because five red cows arrived in Israel last Thursday.

I’m so proud of Texas. Of all the places on the planet where cattle grow, Texas takes the blue ribbon at the county fair.

Why do Christians Care?

Now why are evangelical Christians interested in helping Israel acquire a red heifer? Why would Christians help Orthodox Jews restart temple Judaism, a system we agree is not the way man is made right with God.

Well, it’s all about prophecy. End times prophecy talks about there being a functioning temple in place in the final days. For there to be a temple that is functioning, there needs to be a red heifer. Christians don’t so much care about temple Judaism. Christians care about the return of our Lord. So many Christians are willing to help Jews along the way, if it brings about the conditions that we see in End Times Prophecy.

It’s a reminder that God is not done with Israel. I know that there are many theological traditions that teach that the Christian church has replaced Israel, but that’s ridiculous, especially when you consider what Paul said:

…Blindness in part has happened to Israel until the fullness of the Gentiles has come in. And so all Israel will be saved, as it is written:

“The Deliverer will come out of Zion, And He will turn away ungodliness from Jacob; For this is My covenant with them, When I take away their sins.”

God isn’t done with Israel. Their path to salvation is still being paved. God put a pause on the salvation plan of Israel for many years so that he could bring untold millions of gentiles into the fold. Now, He might just be returning to his focus on Israel. It will be interesting and exciting to see what happens next.

One comment on “Red Heifers Arrive In Israel. Could This Be The End Times?”