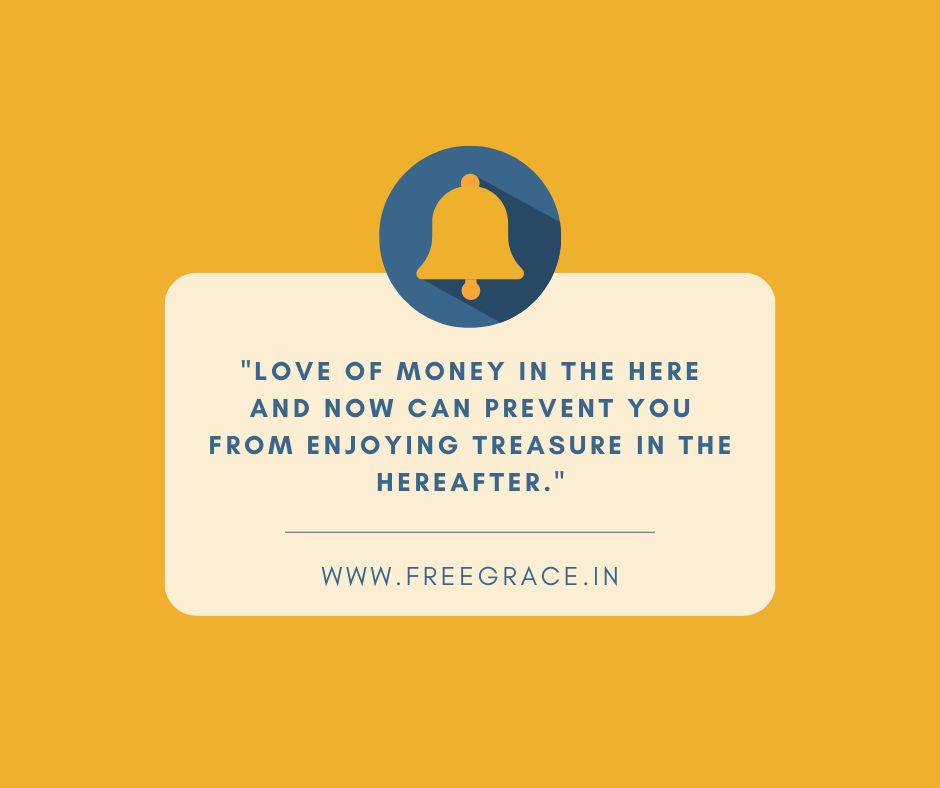 The Love of Money (Principles of Grace Giving)

Does your salvation depend on how you handle money?

Throughout the centuries, Christians have often been taught that going to heaven or hell can depend on what you do with your wallet. But the grace message can help clarify many of those misconceptions, giving you a more Biblical view of giving.

Confusion about money and salvation can be traced to a misreading of a few key texts, including this warning to Timothy:

But godliness with contentment is great gain. For we brought nothing into the world, and we can take nothing out. If we have food and clothing, we will be content with these. But those who want to be rich fall into temptation, a trap, and many foolish and harmful desires, which plunge people into ruin and destruction. For the love of money is a root of all kinds of evil, and by craving it, some have wandered away from the faith and pierced themselves with many griefs (1 Tim 6:6-10, emphasis added).

Paul warned that fixating on getting rich caused some Christians to wander from the faith and even come to grief. That doesn't sound good. But what does it mean? And did Paul mean you could lose your salvation if you mishandled your money?

Historically, many Christians thought that.

For example, early in Christian history, some people became so terrified that having money would damn them to hell that they sold all their possessions and went out to live in the deserts of Egypt, which started the monastic movement. These men and women hoped that by adopting extreme poverty, they could avoid enough evil and do enough good to merit going to heaven. As a modern monk explained, “While no one is worthy of salvation in and of himself, monks attempt to be worthy through vows, such as poverty, as the example of the Lord Jesus Christ before them who was not in His own earthly right wealthy” (see here). Thinking that poverty can make you worthy of heaven is an example of how having a false gospel can lead to having the wrong attitude toward money.

To give another example, do you know what sparked the Protestant Reformation? Money. The Roman Catholic Church needed to raise funds to build St. Peter’s Basilica, so they sold “indulgences.” The pope guaranteed that an indulgence would remove some of the punishment of your sins in purgatory, allowing you to enter heaven earlier. Scores of superstitious Catholics bought indulgences. But some people, such as Martin Luther, rejected that practice as unbiblical and, along the way, rediscovered the doctrine of justification by faith apart from works.

Grace is directly relevant to finances because if you’re clear on the gospel, you can better understand the Biblical use and abuse of money.

Coming back to Paul’s warning to Timothy, as grace believers, we can readily admit that an eternally secure person can wander into error and immorality over the love of money. However, if you did, you wouldn’t lose your salvation. That’s not a consequence of committing any sin.

So why should you avoid the love of money?

Simple: sin will make you miserable. As Paul said, you’ll be pierced with “grief,” a Greek word meaning “intense anxiety, anguish, grief, emotional pain” (Swanson, DBL). The love of money is a harmful desire that, if acted upon, can ruin you. Think of all the harm caused to marriages, families, careers, and reputations by foolish get-rich-quick schemes. Seven out of ten of the wealthiest men in the world are divorced. Like any sin, the love of money can lead to negative earthly consequences.

The love of money can also lead to bad spiritual consequences. As Paul said, you could wander from the faith. And Jesus warned that riches could choke your spiritual growth to the point that you’d produce no fruit to maturity (Luke 8:14). What happens then? Well, if you haven’t produced mature fruit, that will affect your eternal rewards in the kingdom to come.

But here’s something else to consider. Part of that fruitfulness is the act of giving itself. Is it possible that the love of money has led some believers into the error of never giving at all? I imagine people could love their money so much that they never support the gospel or help their neighbors.

What’s the right attitude to have towards money? Don’t love it. And don’t be afraid of it. Instead, be content. As an Amish proverb says, “You are only poor when you want more than you have.”

In sum, the love of money can lead to serious negative earthly and spiritual consequences. Take those dangers seriously. But refuse to allow any preacher or teacher to manipulate you into giving based on promises of heaven or threats of hell.

Thought for the day: Love of money in the here and now can prevent you from enjoying treasure in the hereafter.

Is It a Sin Not to Attend Church?
A Greatly Neglected Principle for Victory
What’s the Difference Between a True and False Believer? (Free Grace FAQ)
1 2 3 … 40 Next »

One comment on “The Love of Money (Principles of Grace Giving)”