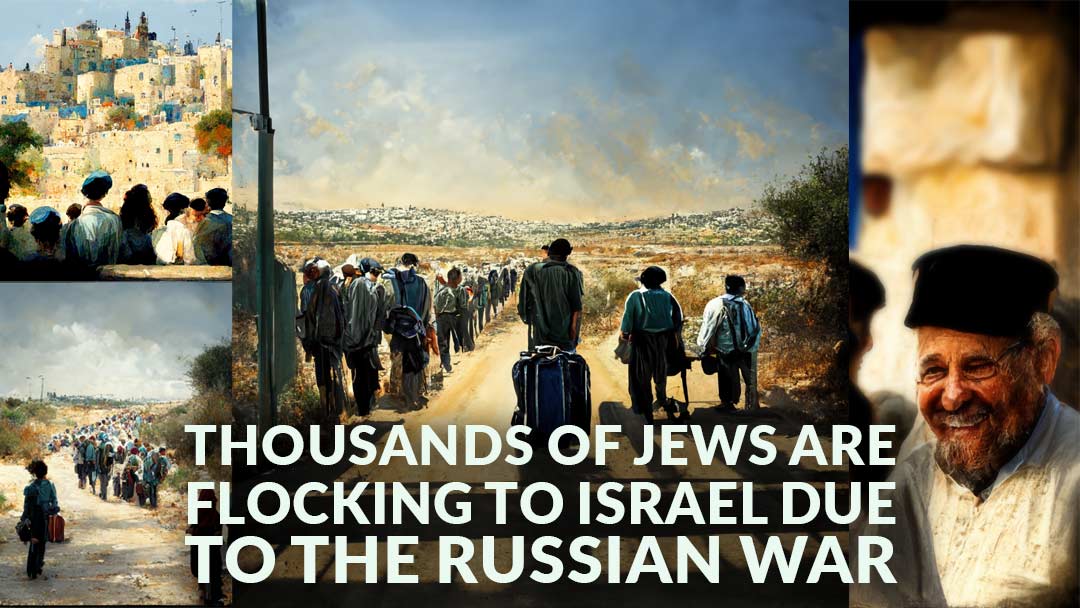 Thousands of Jews Flock to Israel

Did you know that tens of thousands of Russian and Ukrainian Jews have immigrated to Israel since the beginning of the conflict in Eastern Europe? in this video/podcast episode, Lucas explores, how that relates to biblical prophecy and what’s to come.

Near the beginning of the Ukrainian invasion the Kremlin announced its intentions to shut down the Russian branch of the Jewish agency, which is the agency that aids Jews in returning to Israel. The hearing which will decide whether it will be closed down or not he’s going to happen on September 19.

So you may be wondering why did the Russian leader ship decide to shut down the Jewish agency? Well, almost immediately after the Ukrainian invasion there was a huge wave of immigration out of Russia.

For example Moscows chief rabbi Rabbi Goldschmidt left Russia right after the Russian invasion of Ukraine began and he’s not the only one. As of mid August 165,000 Jews, roughly 1 in 8, had left Russia.

As of yet there has not been a concerted anti-Semitic effort against Russian Jews, but history tells us that when things in that part of the world go badly, Jews are often the propaganda target who suffer. Add to that, and the fact that the former Soviet Union blocked thousands and thousands of Jews from leaving, and the immigration effort after the fall of the Soviet Union was nearly innumerable. So political moves that hint at an effort against Jews, make the Jewish population of Eastern Europe quite nervous, and rightfully so.

In Ukraine, things are generally more friendly to the Jewish population, for instance, Ukraine is headed by Jewish Ukrainian president, Volodymyr Zelenskyy and he is not the first Jewish leader that Ukraine has had. Nonetheless, thousands of Ukrainian Jews have left the country since the conflict began.

Where Are They Going?

Where have these Russian and Ukrainian Jews gone? Many have gone to the United States, and other surrounding countries. However, It’s estimated that over 20,000 Jews have immigrated to Israel since the beginning of the war. That’s an increase of over 600% compared to immigration averages. Many more are there on temporary status. Israel offers Jewish citizenship to anyone in the world with at least one Jewish grandparent. Thousands of international Jews are flocking to Israel to accept citizenship.

This makes me think of a verse I read recently. in Jeremiah, chapter 3, he is talking about a future time when Christ will rule the Nations. He says,

At that time they will call Jerusalem The Throne of the Lord, and all nations will gather in Jerusalem to honor the name of the Lord. No longer will they follow the stubbornness of their evil hearts. In those days the people of Judah will join the people of Israel, and together they will come from a northern land to the land I gave your ancestors as an inheritance. Jer 3:17-18

Some say that we are seeing this prophecy’s fulfillment right now, since the verse says that Jewish people will come from the lands of the north. Of course, Ukraine and Russia or to the north of Israel, but there are a couple of clues in these verses, that the time spoken of is not yet. Notice that the verse says Jerusalem will be called the throne of the Lord, and that all nations will gather in Jerusalem, to honor the name of the Lord. It also says that the people will no longer follow the stubbornness of their evil hearts. Have any of those things happened yet? No, so this verse is looking to a future time.

What is so exciting about verses like this one is that they speak of a New World order in which the Lord will be openly worshiped by the entire world, and Jerusalem will be his capital city. modern day Jewish immigration is exciting because it represents an unprecedented historical move, something that reminds us of biblical times. I don’t think there is any doubt that God is doing something with Israel, but there is quite a lot that still must happen before we can declare prophecies like Jeremiah three fulfilled.

Today, let’s let our focus be on the future return of Christ and his coming kingdom of heaven.