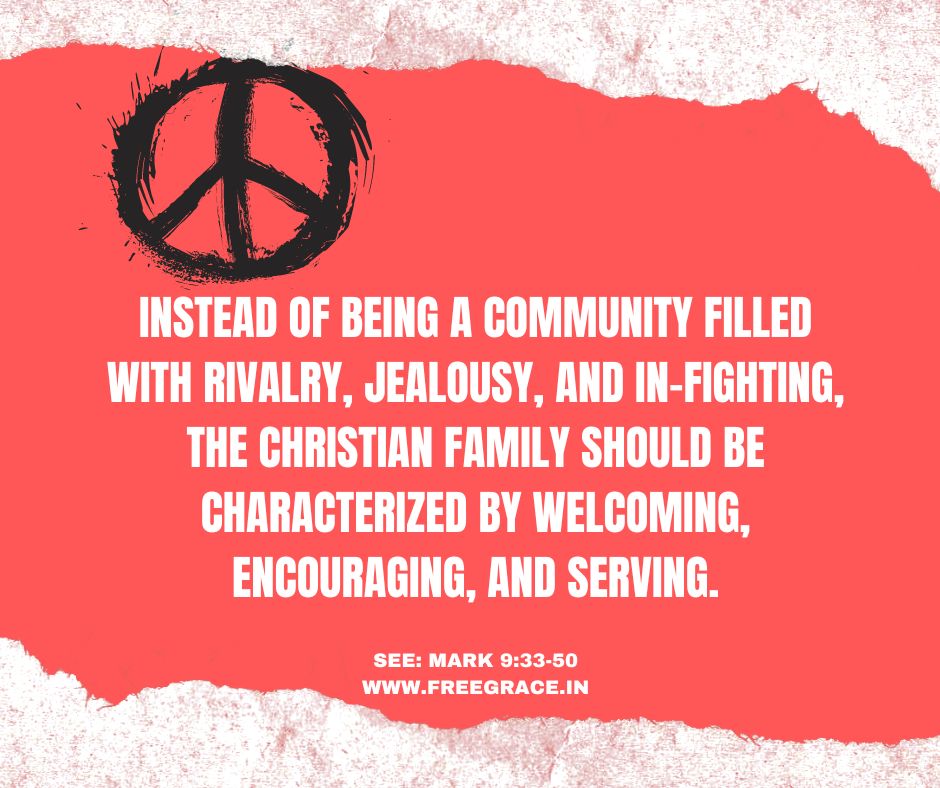 I’ll tell you what the disciples did—they argued!

Specifically, they argued about who would be the greatest in the kingdom of heaven:

They came to Capernaum. When he was in the house, he asked them, “What were you arguing about on the way?” But they were silent, because on the way they had been arguing with one another about who was the greatest (Mark 9:33-34).

Jesus sat the twelve disciples down, presented them with a little child, and told them that greatness would require being a servant of all and welcoming little children in His name:

As it happens, the disciples weren’t very welcoming. They could be jealous and over-protective. For example, John was worried about other people outside the apostolic circle using Jesus’ name to drive out demons:

John said to him, “Teacher, we saw someone driving out demons in your name, and we tried to stop him because he wasn’t following us.” (Mark 9:38).

John wanted to know whether they should welcome that kind of person or resist him. Jesus was clear—apply the principle of welcoming:

“Don’t stop him,” said Jesus, “because there is no one who will perform a miracle in my name who can soon afterward speak evil of me. For whoever is not against us is for us. And whoever gives you a cup of water to drink in my name, because you belong to Christ—truly I tell you, he will never lose his reward” (Mark 9:39-41).

Jesus re-emphasized the need to serve each other. If they did that, they’d be rewarded. By contrast, if they didn’t welcome and serve each other, the implication is that they’d lose rewards.

And on that note, Jesus spoke this challenging teaching—and to preserve the difficulty of this passage, I’ve replaced the traditional word “hell” with what the text actually says, “Gehenna,” a reference to a valley outside of Jerusalem:

Frankly, I don’t know what to make of this. My favorite commentators are divided on what Jesus means. To give just two possibilities (out of many)—

Tony Evans takes this to mean that unbelievers should take drastic measures to remove whatever sins are hindering them from coming to faith in Christ. It’s better to give up your sins rather than never come to faith and end up in eternal hell (The Tony Evans Bible Commentary, p. 940).

By contrast, Michael Eaton thinks this is all about greatness in the kingdom and that Jesus was urging disciples to remove anything that might hinder their experience of the kingdom now and which might result in the loss of eternal rewards (or greatness) later. He argues that the fires of “Gehenna” is a metaphor for the purifying fire of 1 Cor 3:11-15, “where the fire of God seriously deprives the believer of their reward if they have lived a rebelliously inconsistent life.” When Jesus says, “everyone will be salted with fire,” Eaton takes that as evidence that this is a matter of purification, not punishment (The Branch New Testament Commentary, p. 145).

I don’t know how best to interpret this passage. But at the end of it, you find the first one another command:

“Have salt among yourselves, be at peace with one another” (Mark 9:50b, emphasis added).

Instead of being a community filled with rivalry, jealousy, and in-fighting, the Christian family should be characterized by welcoming, encouraging, and serving.

For that to be a reality and not just an ideal, we need to purify ourselves (“have salt among yourselves”) from the kinds of bad attitudes displayed by the disciples, such as regarding each other as rivals and seeing other workers as enemies. Instead, we should be at peace, which is a command. Instead of passively waiting and hoping for peace to break out, the Christian community should actively pursue peace by welcoming and serving the neighbor.

“Blessed are the peacemakers,” Jesus said. Don’t let any fleshly thing block you from that blessing.

Why Are You Spiritually Burnt Out?
Give What You Can (2 Corinthians 8:1-6) (Principles of Grace Giving)
The Father Knows All About Your Busted Minivan
1 2 3 … 40 Next »