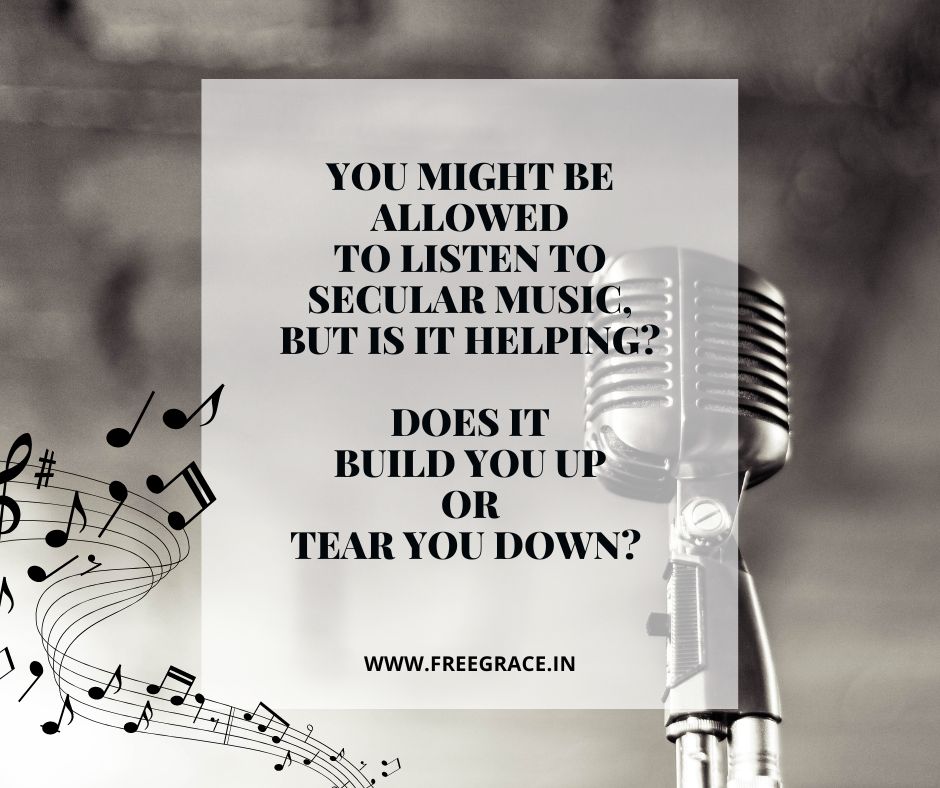 Is Listening to Secular Music a Sin?

“I would really like to know: is listening to secular music (note: not satanic music like metal, etc...) a sin, and am I eternally damned for listening to it as a Christian?”

There are a few layers to your question.

First, you ask if a Christian can lose his or her salvation by listening to the wrong music. And the answer I would like to make very clear to you is “No.” You didn’t do anything to earn your salvation, and there’s nothing you can do to lose it. You are justified by grace, through faith, apart from works (Eph 2:8-9; Gal 2:16). Jesus promised that the one who believes in Him will never perish, come under judgment, be cast out, or be snatched away. So, once you believe you are eternally secure. Your taste in music cannot change that. So, no, a believer cannot be eternally damned for listening to bad music.

Second, your question distinguishes secular music and Satanic music. I think that distinction isn’t as clear as we might hope. Just because something is not overtly Satanic (i.e., literally about devil worship, etc.), does not mean it doesn’t implicitly reflect ungodly values and purposes. I remember when I first realized that. It was before I was a Christian. I was in 11th grade English class, studying Bob Dylan’s “Mr. Tambourine Man.” It turned out the song was not about an unusual love for the tambourine but about following around a drug dealer. When I sang that song, that’s what I was unconsciously singing about. How many other secular songs glorify drugs, fornication, irresponsibility, vice, revenge, etc?

Let me tell you a story.

When I was a teenager, music was enormously important to me. I spent hours listening to music or flipping through record stores looking for a particular album. If I had money, I would spend it on music, sending away for underground 7” albums, or going to concerts. It was part of my identity in a way that isn’t true today.

My very favorite band was Nirvana. When I first heard “Smells Like Teen Spirit,” I felt like that song represented my life! I was extremely passionate about them. My very first concert was to see Nirvana. It was on Nov 2, 1993. I was fifteen. (Boy, that stadium sure smelled funny!)

I loved grunge and punk music and got into darker alternative bands such as Nine Inch Nails and Tool.

I should also mention that during this time, I was very depressed.

Then Kurt Cobain, the lead guitarist for Nirvana, committed suicide. That was April 5, 1994.

Over the next couple of years, I struggled with that question, and I realized that bombarding myself with that music was affecting how I felt and thought. When I came to faith in Jesus in June 1995, shortly after, I got rid of my entire record collection. I gave much of the collection away to friends, and sold other albums, but the worst of them, I destroyed. Honestly, that helped. Not listening to people screaming about dark themes for hours every day changed my mood.

Today, music has very little role in my life. I’m not against music. I’m just not as interested in it as I once was. I’ll occasionally enjoy a new song. There are composers that I like that I’ll play in the background. But for the most part, I don’t listen to music.

But I will watch TV, which raises the same questions as you about music. Is it a sin to watch secular TV?

In that case, there are some lines in the sand that my wife and I will not cross when it comes to TV shows (e.g., sexual issues). But we also try to apply some general principles to your music consumption.

For example, Paul said that whatever is not of faith is sin (Rom 14:23). Are you listening to that secular music to express your faith? Do you suspect that it’s wrong, but do it anyway? Then you’re sinning. The trouble is that legalists can distort your conscience, making you scared of doing anything.

Another principle is that Paul said we should dwell on things that are true, just, honorable, pure, lovely, and commendable (Phil 4:8). Secular artists can capture those values. But are those values promoted by your music?

By analogy, I sometimes see my kids watching a show, and I have to ask them, “Is this making you smarter or stupider?” “Stupider,” they’ll admit, and change the channel. If your music isn’t helping abide in Christ, you might consider doing the same.