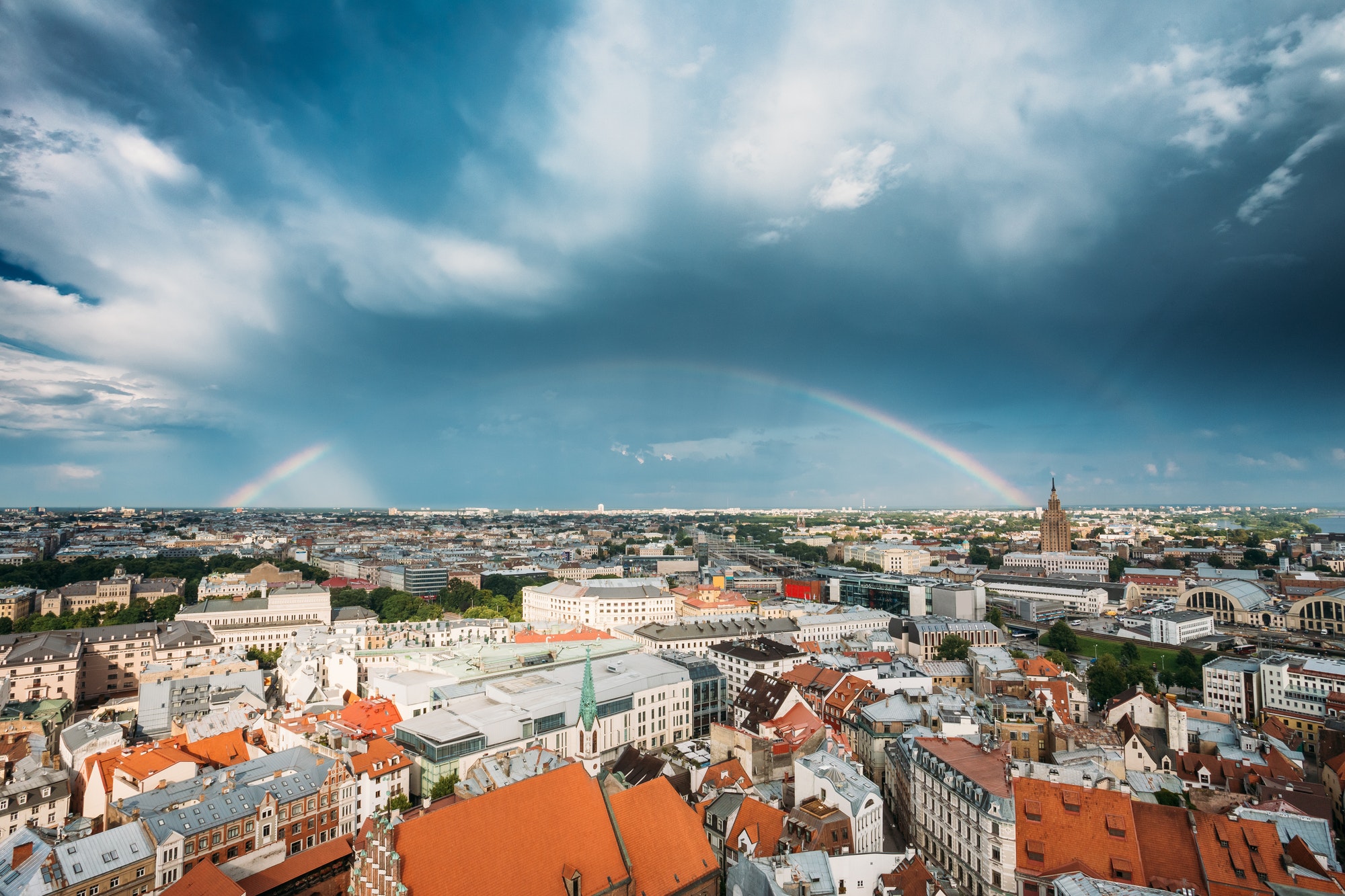 I got a call from Clay, the missions pastor of a large church in Athens, Texas, one afternoon as another summer was approaching. I had never met him before, but he had gotten my name from a local youth minister that had me speak at his youth events.

“Hey, I’m organizing a mission trip to Latvia, and was wondering if you’d come and be our evangelist,” Clay said after we got introductions and pleasantries out of the way.

"What's Latvia?” I said. Already my blood pressure was rising. I had a personal policy of saying yes to any speaking gig, but this was making me nervous. I had never left the continent before. International travel was an audacious prospect for me, but I didn't want to admit I was afraid.

“It’s one of the small Baltic states in Eastern Europe. It was part of the former Soviet Union,” he explained. That didn’t make me feel any better. I had heard some pretty nasty stories about being thrown into the Gulag.

"Can we— Err, I mean— Is it legal to preach there?" I said this, knowing that I was showing my ignorance. I just wanted to be clear on what I was getting into. Clay took a long pause before he spoke, probably reeling from my lack of geographical knowledge.

"Yeah, of course. It's not only legal, but they are very open to the gospel. We've been seven times," he said. At that, my tension began to release. I already knew I would say yes, but I had just wanted to see if I should kiss my momma goodbye forever before going. He assured me that we'd come back alive, and I agreed. Before we hung up the phone, I was committed to being the trip evangelist for a mission to Latvia, and the best part was that the church would pay for my trip. He gave me one final bit of advice.

"Whatever you do, don't fall in love while we're there. The Latvian girls are beautiful. All of the women look like fashion models. We've had more than one young man fall hard for a Latvian lady," he said. I liked the sound of this trip already.

Latvia was a land of magic and beauty. The capital of Rega was a bustling city, but as we drove to Cesis, which would be our destination for two weeks, I watched the sprawling cityscape give up its rigid lines to domesticated farming land and then finally forested hills. The scenery was utterly green. Though snow blanketed the area a goodly portion of the year, it was also part of the fertile swath of countryside that had fed the Russian federation of states for decades. I could see why. Everywhere I looked was a blooming haven of vegetation.

Cesis was a proper town with a few pubs, restaurants, and a little under-attended church. The town's architecture was strongly reminiscent of medieval stone. Many of the buildings had stood their ground for centuries. A feudal era castle was one of the main features of the beautiful little corner of Eastern Europe. For a few bucks, tourists could climb the turret tower and look over the red clay roofs of the city. Spreading out below the castle was a mild meandering river that snaked through the gentle woods. I had imagined my first international mission trip would be in some dusty corner of Africa filled with squalor and poverty. It wasn't meant to be. This was like arriving in paradise.

Though the scenery was amazing, the people were more of a pleasant enigma than I had dreamed. Our team would spread out a blanket in the wooded patch near the gardened stream, and teenagers would suddenly materialize. There was rarely a time when we didn't have at least a dozen high school-aged kids following us around. They were eager to hear what we had to say and my translator assured me it was genuine interest.

I had thought we would have formal revival-style meetings where there was a designated preaching time. Though we did that some, the most satisfying times were the impromptu meetings. One evening we were having dinner at a pub and pizza place near the city center. We had paid for pizza for two dozen teens. The place was busy with other patrons with whom we had no association. We sat at a long table with the twenty or so kids drinking the Latvian version of Coca Cola. At one point in the meal, and I'm not sure how he determined this, my translator turned to me and said, "It's time."

I knew what that meant. I was to stand and share the gospel. Right there in the middle of the pizza parlor, my translator and I stood, and we began to tell a full house of pizza-eating Latvians about Jesus. It was a rush of nerves and satisfaction. My heart beat like racehorse hooves as I did my best to explain what I knew about Jesus.

A day into the trip, I noticed that something was peculiar about the schedule. I didn't wear a watch, nor did I have a cell phone at the time. There was a bell tower in town which rang out the hour, but I hadn't paid much attention to it. As we returned to the little hostel outside of town, I asked one of the team members, "What time is it?" It felt like a very long day. She looked at her watch and reported.

"12:20 am," she said. My jaw could have hit the floor. The sun was still up, and the dusky light promised to swirl about the horizon for at least another hour.

"Sheesh, what time does it get dark around here?" I asked, trying to understand why the sun was so slow in its descent.

"It's dark from about 1:00 am to 4:00 am," she explained with a smile.  "That's why we come this time of year. There's lots of daytime. That offered the maximum number of hours for us to evangelize. The other half of the year, the opposite was true. The long winter boasted days with only four hours of sunlight, while the nights lasted nearly twenty. It was no wonder that these Latvian kids wanted to get the most out of the summer sun considering the long months they were overspread in darkness.

One of our main projects in Cesis was to host a sports camp. For whatever reason, American basketball had become a Latvian fascination. We rented a sports center in town and taught them to play. We brought along a handful of basketball coaches from the United States. The kids would rotate through eight stations where they would learn the fundamentals of the game. One of the stations was mine, though what I was teaching them was something different altogether.

I had been in a basketball class in college, and I was by far the worst player. I wasn't there to teach them to dribble or run plays, (If basketball has plays— I'm not even sure). They would rotate to my station, sweating from their work out. They'd get a fifteen minute "water break" as I talked to them about Jesus.

Though it was a fantastic feeling to be talking to kids on the other side of the world about Christ, I was nervous at the same time. I was clear on the fact that Jesus died for sins and rose again. I didn't know what to tell the kids they had to do to receive the gift of salvation. Was it belief? Was it behavior? Was it repentance? I hid my lack of clarity behind a host of interesting illustrations and pseudo-spiritual stories.

The final weekend we were there, we held a "youth retreat." There was a recreational center outside the city, which was a former summer camp run by the Communists. It had long since been owned by a private party and was now a rentable venue for events. We chartered a large bus to carry about fifty Latvian teens to this retreat center. Over the weekend, we did an intensive youth function. We played games, sang songs, and talked to them about what Jesus had planned for their lives.

The final evening we were with them, I pulled out my most emotionally manipulative story. I talked to the kids about falling for a girl during college. She unexpectedly died that year. As the tears fell from their faces, I used the emotion of the moment to ask them to commit to Jesus. It was a cheap trick, but I had seen countless other speakers do it.

I had them bow their heads and close their eyes. Once again, I felt uncomfortable with what I was about to do, though I knew the team expected it. I knew Clay, who had invited me to come and paid for my trip, expected me to give an invitation. That was the moment they had been waiting for all week and I delivered.

I knew that we would soon be leaving town. I knew that these twenty-one kids would soon be left behind, watching the Americans drive away. Without anyone to disciple them, it seemed like a hopeless prospect. The Americans would return in a year after the snow abated, and the days grew long, but would that be enough? Would they all abandon the faith by then?

The Apostle Paul once said that he planted, meaning he evangelized a group of people, and another person named Apollos watered, meaning he helped the new believers grow. Where was my Apollos? Who would disciple these young, eager believers in the days, weeks, and years after we left?