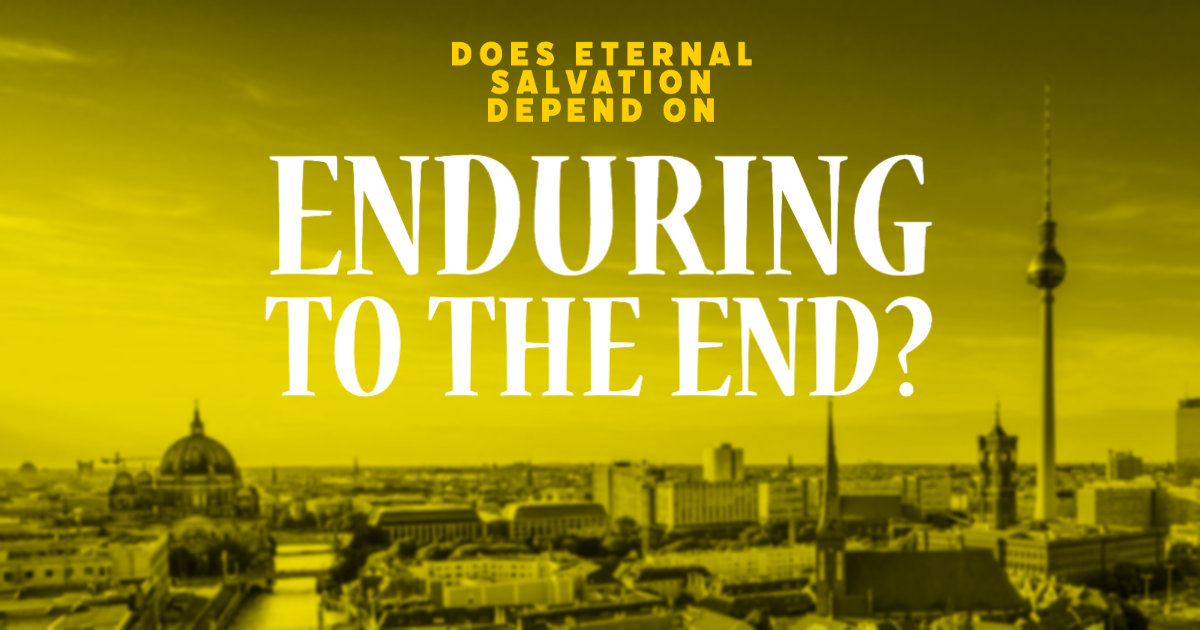 Question: If believers are eternally secure, why did Jesus say, “He who endures to the end will be saved”? Doesn’t that show you need to keep believing and doing good work to the end of your life to go to heaven when you die?

In this case, the context is a prophecy about the future. If the Sermon on the Mount is the great statement of Jesus’ moral teaching, then the Olivet Discourse is His great prophetic teaching. Jesus is giving a prophecy about the future Tribulation period. All Free Grace advocates agree with that obvious but often overlooked context. What difference does it make to this passage? All the difference in the world.

Before giving the prophecy, Jesus wept over Jerusalem's unwillingness to come to Him, and He pronounced their “house” (i.e., Temple) to be desolate (Matt 23:38). As the Lord left the Temple compound, He said every stone of the buildings would be thrown down. Then the disciples asked Him this question:

“Tell us, when will these things happen? And what is the sign of your coming and of the end of the age?” (Matt 24:3b).

Jesus goes on to prophecy about the Tribulation. Here is what He said:

“For nation will rise up against nation, and kingdom against kingdom. There will be famines and earthquakes in various places. All these events are the beginning of labor pains. Then they will hand you over to be persecuted, and they will kill you. You will be hated by all nations because of my name. Then many will fall away, betray one another, and hate one another. Many false prophets will rise up and deceive many. Because lawlessness will multiply, the love of many will grow cold. But the one who endures to the end will be saved. This good news of the kingdom will be proclaimed in all the world as a testimony to all nations, and then the end will come” (Matt 24:7-14, emphasis added).

The Tribulation will be a time of horrors, natural disasters, persecution, and martyrdom. That’s the context. So what do the words “endure,” “the end,” and “salvation” refer to in that prophecy?

First, enduring means continuing in faith and love. Jesus warned against false Messiahs and prophets deceiving the people and leading them astray (Matt 24:5, 11, 23-24). Given that deception, you must continue to believe the truth. The believer alive during the Tribulation must also endure in love towards other people. Jesus also warned that “the love of many will grow cold.” Those two considerations should already tell you this is not about eternal salvation. Why not? You can only endure in faith if you’ve already believed, and if you’ve already believed, you have everlasting life (John 3:16). The believer's future is already settled. But also, we know that eternal salvation is by faith apart from works (Eph 2:8-9; Gal 2:16). Whatever kind of salvation depends on continuing in love, it is not eternal salvation.

Third, Jesus said such persevering believers will be saved. What does it mean to be saved? Jesus warned about being killed in v 9. And later, in v 22, Jesus said the Tribulation would be shortened because if it went on any longer, “no one would survive” (HCSB). In other words, this is salvation from physical death. Sadly, many thousands of believers will be martyred during this time (cf. Rev 7:9-17). However, if a believer endures in faith and love through the Tribulation, then Jesus will save these believers from persecution and martyrdom. But positively, they may also be saved in the sense of entering the kingdom and enjoying rewards within it.

In sum, Free Grace theology believes this passage has no bearing on eternal security or whether works are required for eternal salvation. Instead, it refers to the physical deliverance of the faithful at the end of the Tribulation.

What Principles Help Make a Christian Marriage Successful?
Is It Your Responsibility to Squeeze Out Grapes?
Does the Bible Ever Say We’re Saved by Faith “Alone”?
1 2 3 … 39 Next »