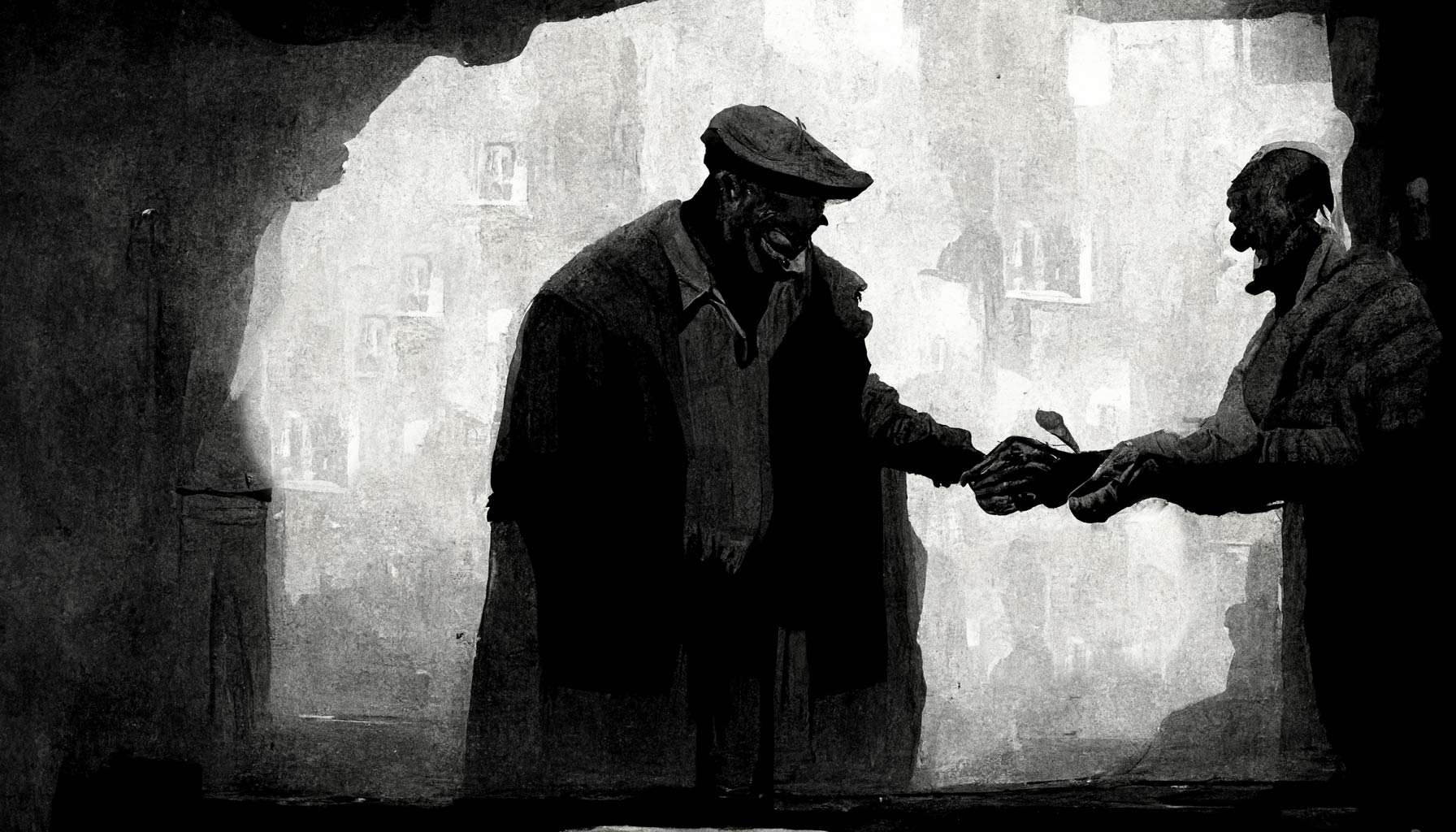 Do you agree with Joe Biden’s plan to erase student debt? In this episode, Lucas Kitchen will explore some possible motivations and alternatives to the student loan erasing, and look at the Biblical precedent for debt forgiveness.

President Joe Biden is pushing for student loan forgiveness. I was initially against it, but I’m thinking it over, and I’ll tell you why after this.

Hi, I’m Lucas Kitchen, thanks for being with me on More To The STory a show where we take a look at what’s happening in the world from a Christian perspective. Subscribe for notifications on the platform where you’re enjoying this show, or go to freegrace.in to subscribe and get a daily or weekly email with all of freegrace international’s content.

So, it seems like everyone is talking about it. Joe Biden wants to forgive up to 20 thousand dollars in student debt per borrower. It’s upset a lot of people.

“I paid off my student loan, and so should you!” They say. I was initially in that camp, but I’ve shifted my thinking on this just a bit, and I’d like to explain why.

It’s true that I’m not really happy with a lot of what comes out of Washington. There’s plenty to be disappointed with, but I want to evaluate each policy on its own merit, with respect to those who are trying what they think they ought to try.

Now, before we get to student debt forgiveness, Maybe it’s been a while since you were in college, and financial aid is a little hazy. Or, more likely, even when you were in college, you were like me, and you didn’t have a clue where the money came from, but who cared, free money!

Let’s review The basic categories of student financial aid so we can have a clue what Biden is talking about.

A grant, such as the Pell Grant, is money that you don’t have to pay back. So it’s not affected by Biden’s plan.

Private student loans are given by banks or other loaners. They have to be paid back according to the loan agreement and are not affected by Biden’s plan.

School scholarships are financial aid that is given by an individual school or private donor. These don’t have to be paid back, so they aren’t affected by Biden’s plan either.

It’s government-issued student loans that Biden is focusing on. We call them Federal Loans. The money comes from the government, and it’s usually supposed to be paid back about ten to fifteen years from the time you are no longer a student.

This was the first thing that helped me soften to the idea of loan forgiveness. When I first heard Biden talk about loan forgiveness, I didn’t know that 85 to 90 percent of student-loan dollars are borrowed from the federal government. governmentI had assumed that Biden was trying to force private banks to give loans to students, then force the banks to forgetaboutit. Now that would be immoral. But that’s not what Biden is trying to do. He’s just focused on federal loans.

This doesn’t automatically mean it’s a good idea to forgive billions of dollars of loans, but it at least means, the loan forgiveness is at least not stealing from private banks… So, I guess that’s good.

There is something odd about the whole thing, though. The loan situation is talked about as if it’s a crisis. It’s partly what’s driving the apparent need for loan forgiveness. To understand, we need to get a fix on the default rate.

So What is default? Default is when you don’t pay your loan bill. How common is it?

Now this is what’s odd to me. I assumed we had a huge problem here, but most people seem to be paying their college debt. On top of that there has been a pause on loan payment requirements due to covid 19 for quite some time now.  It just doesn’t seem like a crisis to me.

So, what’s going on? Well, Telling people that they don’t have to pay back their loan is a really popular thing to say. When a vote could benefit you up to 20 thousand dollars, it’s a little easier to turn off the play station and get to the polling booth.

So I don’t believe student loan borrowers are in crisis but I think what is a crisis, is the allowance of short-term cash loan businesses that charge insanely high interest for unsecured personal loans. Some call it predatory lending. You’ll see names like payday loan, fast cash, and lots more. They prey on those who have run out of financial options and are in distress. I’d be all for a policy that aims to restructure the payday loan, fast cash industry. A lot of states have voted to cap interest rates at 35% for these kinds of loans, but seriously! 35% That’s still a terrible interest rate! So, if we want to help those in financial distress, we ought to focus on this as a policy. You know why it’s not the focus? Those who need payday loans, are statistically less likely to vote, and college educated people who borrowed federal dollars are more likely to vote. so… yeah. Student loans it is.

Now, all of this makes me a bit uneasy. I’m not in love with debt forgiveness as a political bargaining chip. I hope this isn’t why it’s happening, but it kind of looks that way to me. That’s at least in part because Biden is looking at doing it as an executive order rather than taking it through the normal legislative channels.

So, let’s go back to this question. Is it wrong for the government to erase loans they have given?

We’ve already said. This isn’t a moral issue. SO calling it right or wrong is a bit of a misnomer. It’s really more about the pros and cons in this case.

Even though it’s not a moral issue, it’s still a big spend for the government to make. I mean a really big spend. The Congressional budget office estimates forgiving student loans in Biden’s plan would ultimately cost us 400 billion dollars, but they admit it’s highly uncertain. So it could be a lot more. My guess, it will be more. It’s always more.

It’s such a big spend; it should be done through congress, not as an executive order in my opinion. An executive order, by the way, is when a president just orders something rather than passing it through the legislative branch. If you need something done fast, like mobilizing the army, because we’re being invaded by Iran, for instance, you use the executive branch that the president resides over. But things that aren’t an immediate urgent emergency should go through the legislative branch. That’s what congress is for. Now recall that ninety-five percent of borrowers are making their payments. So… what’s the rush? I want to give them the benefit of the doubt, here, but it seems hasty to shove it through as an executive order.

Even if it’s done as an executive order, though, it’s still not a moral issue. It may be unwise, but not immoral.

Now let’s imagine that you take political bargaining out of the equation.

This question is a little easier to answer. As I said, I was initially against Federal Student debt cancelation, but I softened on it when I remembered these versese I’m about to read. This is one of the biblical laws that God gave to the nation of Israel in the Old Testament.

At the end of every seven years you must cancel debts. This is how it is to be done: Every creditor shall cancel any loan they have made to a fellow Israelite. They shall not require payment from anyone among their own people, because the Lord’s time for canceling debts has been proclaimed. You may require payment from a foreigner, but you must cancel any debt your fellow Israelite owes you. However, there need be no poor people among you… Deut 15:1-4

There you have it. Biblical era Israel was to forgive domestically held debt every seven years. They could enforce debts to those outside the country, but they were to drop the loan note after seven years of payment for fellow citizens. This has all kinds of financial and economic ramifications that are outside the scope of this episode, but it hit me pretty hard to remember that God’s plan for his people was that no one would get completely smothered by debt. And they would be free of it after seven years of payment.

God didn’t want debt to drive his people into poverty. He didn’t want citizens to oppress each other with unreasonable life-altering levels of ongoing loans. He implemented the first debt relief program. So there is a biblical precedent for forgiving debt. As Christians, we are not under that law, but it does provide a framework for us to consider.

For those who say, “I paid off my debt, and you should too.” I see what you mean, but let’s not forget the lyrics of that great old hymn. “I had a debt I could not pay, He [Jesus] paid the debt He did not owe, I needed someone, To wash my sins away.”

Christianity is based on debt forgiveness. The debt, in our case, was a debt of sin to God, which is much worse than financial debt to the government.  Of course, Jesus advocated for financial responsibility, but he also opposed those who imposed difficult and unreasonable burdens on average people. I think we, as Christians, want to be careful not to be too loudly opposed to forgiving others when we’ve been forgiven so much ourselves. Our likeliness to be unforgiving to others while enjoying forgiveness ourselves is probably why Jesus instructed us to pray daily,

“And forgive us our debts, as we also have forgiven our debtors.” Matthew 6:12

I stand by my claim that the executive branch and the legislative branch should come to an agreement on this before anything is put into action and that it’s not a national crisis, so there is time. It needs to be done wisely, and I’m a bit critical of the haste with which this is happening.

However, I’d suggest that we not be opposed to debt relief as a general principle since it is a biblical concept. It’s easy to let our dislike of the current administration feel like we must oppose every policy they promote. In this case, this policy isn’t immoral or unbiblical. It might have long-term economic downsides, or it may have some grand benefits.

But we know that as Christians forgiveness is a good thing.

don’t forget to visit and subscribe at freegrace.in. or subscribe on the platform on which you are enjoying this episode. If you’re interested I’ll soon be launching a Bible Study series, so watch for that announcement soon. In the mean time, check out The Art Of Grace With Shawn Lazar for a daily devotional podcast and blog. If you have young kids, you may want to take a listen to the free grace kids podcast. You can find all that and more at freegrace.in  Thanks for being with me on this episode of more to the story, I look forward to being back with you soon.

Jews Fleeing to Israel Over Russian War
Another Mega Church Pastor Bites The Dust
A Chat With An AI Bot About Faith, Jesus, And the Bible
1 2 3 … 12 Next »