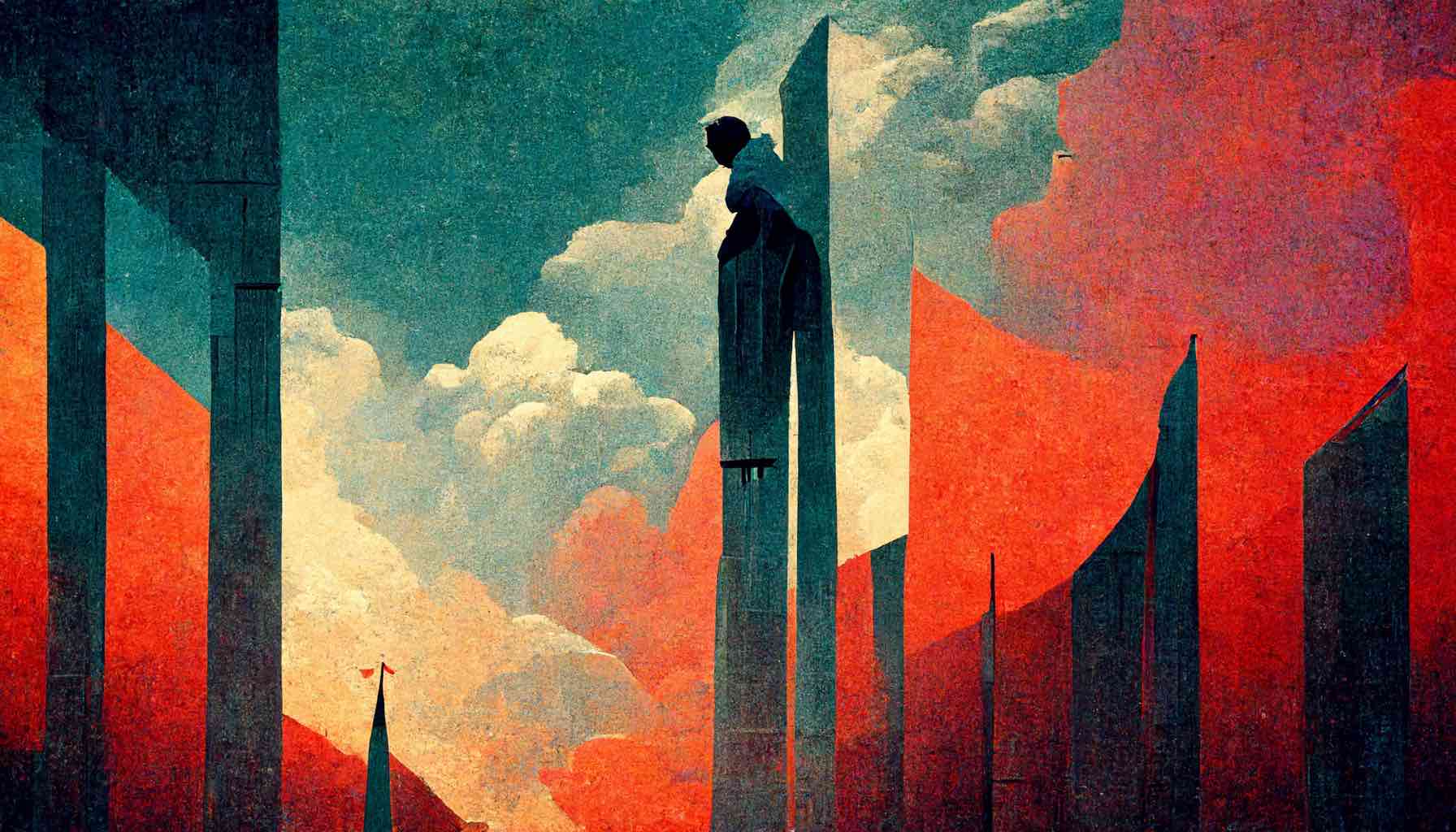 In this episode of More To The Story, Lucas tells the story of his conversation with a liberal atheist who is an ordained minister. He also explores the meaning of waiting on the Lord.

Hi, I’m Lucas Kitchen, thanks for being with me on More To The Story a show where we take a look at what’s happening in the world from a Christian perspective. Subscribe for notifications on the platform where you’re enjoying this show, or go to freegrace.in to subscribe and get a daily or weekly email with all of freegrace international’s content.

So, let’s talk about online ordination. I was introduced to it in a surprising way. But first some back story.

So I’ve been doing this show for about a month and a half. There were a few episodes that I was afraid to publish. Specifically one about LGBTQ issues. My views on the subject aren’t popular in today’s society. I wanted to do the easy thing, the cowardly thing, and stay quite. I was afraid to speak up, but I did because I thought it was the right thing to do.

Fast forward a couple of weeks. Yesterday, I got a message. A surprising message.

The man who sent me the message is politically liberal, openly atheist and he sees the show online. So, I bet you think you can guess what kind of blistering critisism a liberal atheist might level againt me, a politically conservative devout evangelical Christian.

“Hey man, enjoying your freegrace stuff.” Specifically he was talking about this show, more to the story. my tenative response: “Thanks… wait was that sarcastic?”

He followed up by explaining: “100% truthful. I didn’t say I agree with all of it, but I appreciate it. It’s an interesting viewpoint. It’s like you’re an evangelical that seems to look to rationality.”

Now let me pull the curtain back here a little bit. He isn’t just some random stranger. We’ve interacted quite a bit over the years. I’d call him a friend, and I’m pretty sure he’d do the same. Of course we have our differences, but we keep it civil and kind. He explained later in the conversation, “I really like the debt relief piece” That was a recent episode about president Biden’s debt relief plan. He then went on to say, “but [I] 100% disagree with your take on Born This Way.” That was a recent episode we did in which we discussed my conservative Christian view of the LGBTQ issue. He explained his criticism, which I listened to and tried to learn from. Some might say, “aww man you should have blasted him for his views,” but I don’t think that’s helpful. Obviously I’m not going to reverse my position on the LGBTQ thing, but listening to those who disagree is a really good way to figure out how to be more effective in the future. He made some points where my argument could have been stronger, and I agreed.

Now you’re probably wondering what any of this has to do with getting an online ordination. Well, as I was talking to my atheist friend, a little later in the conversation he said:

“Oh, forgot to tell you I got ordained”

I said: “Ordained. Oh Sheesh! Where?” He explained

“You’re talking to Reverand Jonathan Willis of the Universal life Church.” I changed his name for the sake of anonymity, by the way, so don’t go trying to look him up. He went on to say, “I got ordained so I could officiate my niece’s same-sex marriage.”

He had a meeting and had to go, but as he was leaving I said, “I might do a show on the universal life church, and you getting ordained… that’s interesting.” He said: “Do it, it’s not going to offend me. Keep up those videos. It’s brave and I applaud you.”

So, the whole thing stuck me funny. I’m getting encouragement from a liberal atheist ulc “minister”, who officiates same-sex weddings and disagrees with my fundamental beliefs on almost every subject. And yet, he’s encouraging me to keep it up.

Following the conversation I started to think about doing a show on no-wait ordinations.

I got on this so-called Universal life church’s website, and sure enough they offer no-hassle ordinations. I thought, I’ll explore a bit. I’ll click through their ordination process, and abandon it at the last step, before I’m actually “ordained.” I thought for sure there would be a few steps. After all, most study and train, waiting years for each and every step to be completed. it should have been at least a three step process.

I had thought they were going to charge money in a later step, or ask me a series of questions, or have me upload my picture. I was planning to exit the process without completing it at one of these later steps. I thought there would be time to get out before I was committed. Nope. put my name and email in the form. Literally one click from the home page, and I had been officially Ordained by the Universal Life Church.

Getting a coffee has more steps than being ordained now.

one accidental click and now im registered as a universal life minister with this weirdo, cultish, voodoo, LGBTQ promoting organization. Hey, maybe next I’ll join a UFO obduction religion. Sheesh. Their motto is, we are all children of the same universe. Uhh, I’m not sure the universe aware of that. I wanted out immediatly. I mean how would it look having my undergrad and graduate degree in theological studies from a reputable university and seminary joined on the wall by thier, rent-a-diploma cousin, a ulc ordination. After clicking around looking for a way to cancel, I realized it was like a casino, lots of enterances, but no exits. It’s easier to get a divorce in sadia Arabia than to get unordained by the ulc, apparently.

So, I navigated to their contact form and requested that I be “un-ordained.” Is that even a thing? I don’t know.  I explained that I didn’t intend to be ordained into their… uh… system, I was just trying out some experimental stuff my liberal atheist friend gave me, and I made a terrible mistake. I begged to be removed. Of course getting out wasn’t a one step process.

After a nail-bitting wait I recieved this reply:

I'm sorry to hear you will be leaving us. I have revoked your ordination per your request. Please note… Sometimes people have misconceptions about the beliefs of the Universal Life Church Ministries, if you are interested in learning more, I would encourage you to visit the About Section.

so I did. I’ll just say, I’m satisfied with my decision.

So, I’m happy to announce that I have retired from a lengthy 39 minute career as an accidental Universal Life Church ordained Minister. And I couldn’t be more excited. As far as being a child of the universe, I’m not sure if that’s revoked or not.

So, is there anyting to be learned by all this.

Well, I’m not entierly sure. Partly, it was just an interesting hour, but as I was casting around to derive some spiritual meaning from the whole thing, I opened my Bible app and this was the verse of the day.

Wait on the Lord; Be of good courage, And He shall strengthen your heart; Wait, I say, on the Lord! Psalms 27:14

I giggled to myself, that as I was investigating an ordination industry that is all about not having to wait, and being able to get a one-click immediate certificate that promotes you as a man or woman of God, all the while God’s word says, wait on the Lord.

Notice that the verse says, Be of good courage. Why would it need to say that? It’s because it’s scary to wait. It’s scary to feel exposed. Its scary to be a person who is hanging out there in a culture that disagrees, that believes your wrong, that thinks your stupid. It’s hard to wait, it’s hard not to defend yourself, and to stick with what God wants.

But maybe, just maybe, those scary people who disagree with your beliefs, actually respect you for them too. That’s what I learned. I was afraid to talk about LGBT issues. A man who should be my biggest critic, who dissagrees most of what I believe, also respects me for being brave enough to speak up. I hope, it can be said that’s because I’ve waiting on the Lord, and tried to follow his path, rather than taken the easy route.

Don’t forget to visit and subscribe at freegrace.in. or subscribe on the platform on which you are enjoying this episode.

We just launched a new video and podcast show called Free Grace Bible Study series, so check that out if you’re in need of a little more Bible Study in your life.

Also, check out The Art Of Grace With Shawn Lazar, and If you have young kids, you may want to take a listen to the free grace kids podcast. You can find all that and more at freegrace.in  Thanks for being with me on this episode of more to the story, I look forward to being back with you soon.