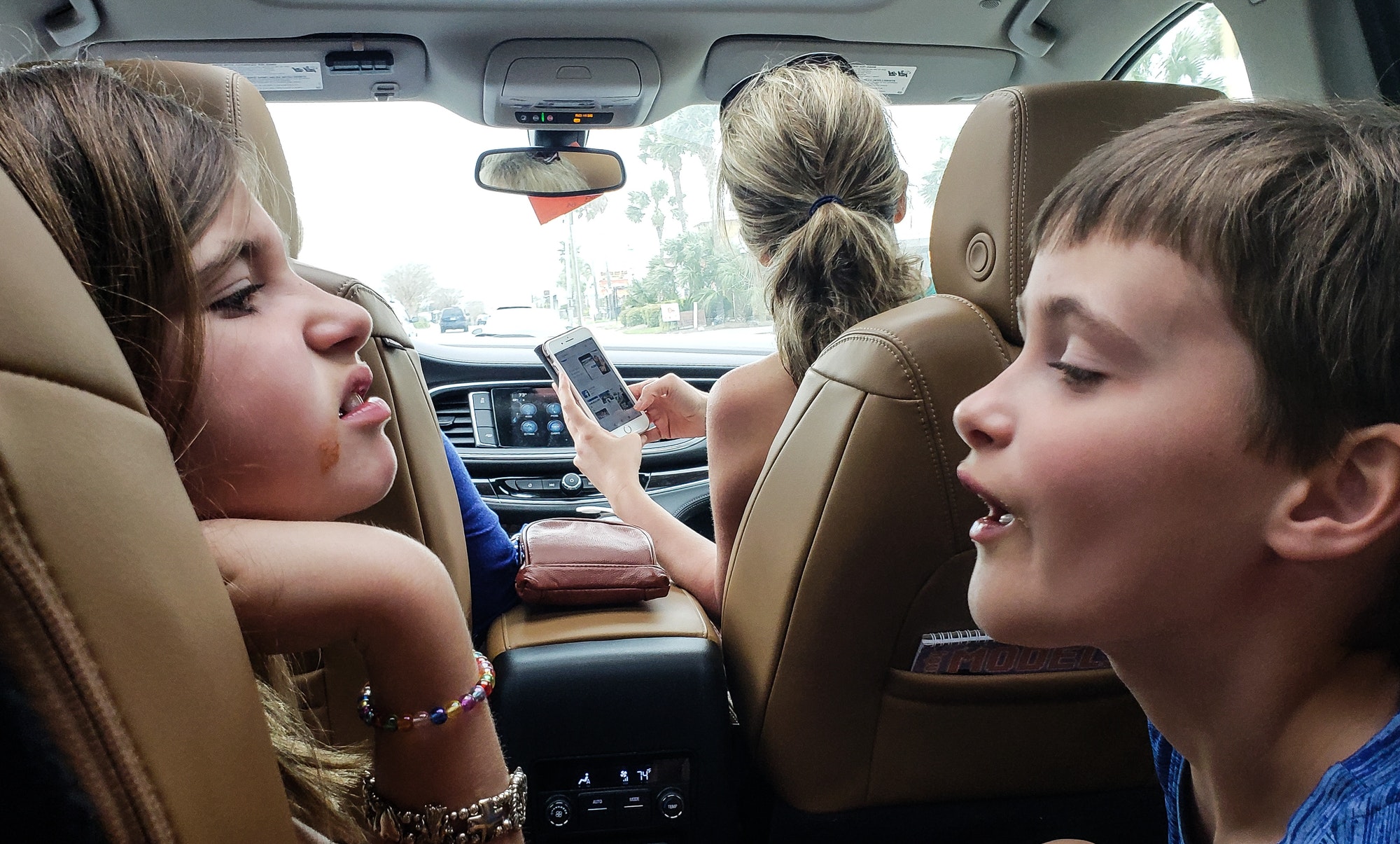 Have you ever met Grumpy Dad? That’s me about half the time.

Let me explain. We’re a family of five, with three kids under the age of seven. We recently took a road trip to the Smoky Mountains (about 10 hours of driving each way). Most acquaintances know me as friendly, talkative, and outgoing. But when I crawl into that rolling tin can stuffed with car seats and blaring mouths, I become a hulking green Grumpy Dad.

I get sullen, sulky, and sour, exploding at every loud noise and inflicting the silent treatment when I can’t control the situation. I replaced the friendly with the fierce. The unpredictable swing in mood is frightening to the kids.

When we were nearing the end of the trip, we stopped at a Mexican food restaurant about an hour from home. As we sat outside, stomachs stuffed, and feeling quite ready to be back in Longview, I asked my six-year-old, “What is your least favorite thing about Daddy, maybe I can work on it.” At first, she said she loved everything about me, but then seemed to realize that it wasn’t entirely true. I saw hesitation in her face, so I questioned her.

“I don’t like it when you get mad and yell at me,” she said a little sheepish as if I would punish her honesty.

“Thanks for telling me, Baby. I’ll try to do better.” I struggled not to let her hear the blood-covered knife I pulled from my heart clanging to the ground.

I thought I would try something new for this trip.

I told my wife that I had some conditions if I were to be present for the predictably painful parade of chaos. I grumpily insisted that each time the kids got too loud for my sensitivities, I would put on my noise canceling headphones, crank up some music, drown out the violent volume, and keep driving as if nothing is happening. I knew it would amount to abandoning her to deal with the carnivorous kids in the car, but I thought it might be better to disengage than to get green again and again.

I honestly don’t know if this was any better than the alternative. I’ll get up the nerve to ask her, eventually. My gut says, “Avoidance is what Daddies do best.”

A while back, my six-year-old was trying to talk to me. She couldn’t break through. “Daddy,” she kept saying more insistent each time.

“What?” I finally said, only giving her half my attention. I can’t remember if it was because I was on my phone, or just hanging my head in utter fatherhood tiredness. “Daddy, it hurts my feelings when I’m talking and you don’t listen.”

I’ve just laid out the two main temptations faced by fathers. 1) Angry outbursts, and 2) withdrawal. To avoid angry outbursts, I withdrew (via 90’s rock music) from my kids. I was afraid that my angry outbursts would win, so I ran away. Now that the trip is over, it’s easy to say that this wasn’t a solution but an escape. Avoidance isn’t a win.

Notice what Paul said about child-raising.

Fathers, do not provoke your children to anger, but bring them up in the discipline and instruction of the Lord.

First, he doesn’t tell mothers to raise the children, but Fathers. Many dads abandon. Many remain but are unapproachable to their kids. If you’re a dad who leaves the child-raising to Momma, then take note. This is a command. You’re to be involved in a present and approachable way.

The second thing he says is that provoking a child to anger is out of bounds. The best way to provoke a kid to anger is to show them anger. We’ve got to fight the temptations to avoid or explode. Dads, We’ve got to win this battle, our kid’s entire lives rest on our ability to do this well.

Be present. Be involved. Be kind. Be approachable. While balancing these characteristics, instruct and give discipline.

Does it sound too complicated; too difficult; too maddening? I know! Though, I have a solution.

After days of travel, I was approaching my limit. I got out of the car at one point, feeling like I couldn’t go another mile with the little screamers. In an irritated prayer I said, “Lord, I don’t know what to do.” Then I paused and amended my statement. “Or, I guess-” I stammered. “I know what to do and I’m not doing it.”

The thing to do is this:

Pray at the exact moment you're tempted to explode or escape.

At that very moment pray something like, “Lord help me stay calm.” or “Lord, give me patience.” Or even just, “Lord, Help.” The magic of this little tactic is amazing. It refocuses the godly mindset. This helpful habit draws on God’s promise to give us “peace that surpasses understanding” when we set our minds in the right place.

Wouldn’t a dose of unimaginable peace help you happily stick with your kids? Prayer brings your mind to God. It allows you a second to reach up to the branch where the fruit of the Spirit is growing, rather than reach to the ground where the fruits of the flesh are rotting.

So, Dads. Next time you’re tempted to avoid or explode, immediately pray for God’s help, and keep it up as long as it takes. You’ll be surprised what it will do.

For The Sake Of The King (Amazon Kindle)