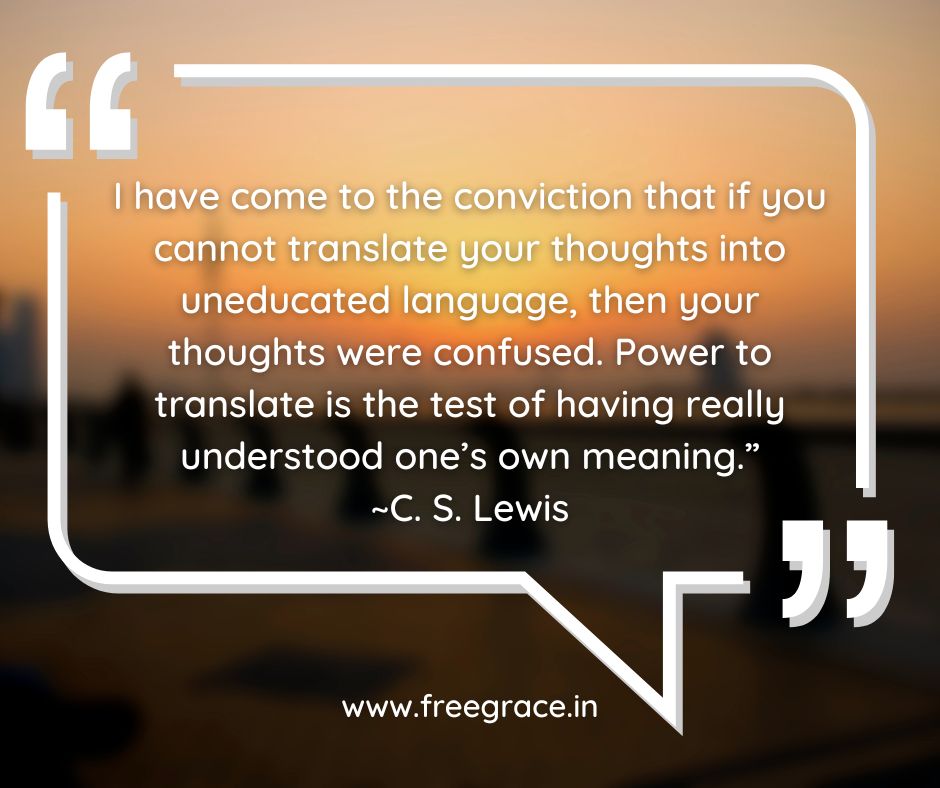 Good Preachers Need to Be Translators

I overheard some people criticizing a famous preacher for his illustration of what it means to repent. Frankly, they were right—his illustration was terrible. But I couldn’t fault him for trying to translate a theological term using language his audience could understand. Have you ever listened to a sermon and had no idea what was being said because you didn’t understand the words being used? It’s a common problem. But what can you do about it?

In 1945, C. S. Lewis gave a lecture to some youth workers and young clergy in the Church of England entitled “Christian Apologetics.” He made several excellent points in it, but I’ll share just one with you. It has to do with the connection between preaching and translating.

It’s normal for any branch of knowledge to develop a technical language. Mechanics, geologists, and martial artists all have a specialized vocabulary. And so do theologians. When you study theology at a university or seminary (as most people in Lewis’ audience had), part of the learning curve is becoming familiar with theological lingo that the “common man” doesn’t know or is likely to misunderstand. Lewis gave some examples of misunderstandings in his day, such as how, when most people hear the word church, they don’t think of the “company of all faithful people” but something more like a “sacred building” or “the clergy.” Another example is how most people understood dogma not as the authoritative teaching of a church but as an “unproved assertion delivered in an arrogant manner.” Any preacher who used those words without explaining their meaning was liable to be misunderstood.

Since the same misunderstandings happen today, what’s a teacher to do? Here’s what Lewis said:

“you must translate every bit of your Theology into the vernacular. This is very troublesome and it means you can say very little in half an hour, but it is essential.”

To put Lewis’ suggestion into practice, vernacular means “the local language.” Why is translating your theology into the local language so troublesome? Because it takes effort to learn how local people speak and even more effort to devise ways of making theological language make sense to them. I’ve found West Texas, North Texas, Boston, Amsterdam, and Montreal all have very different ways of speaking.

Of course, there’s room for teaching people technical theological language. But good preachers should take the “foreign language” of the seminary classroom and translate it for the pulpit or living room.

Forcing yourself to translate had the added benefit of forcing you to think clearly. As Lewis said:

“It is also of the greatest service to your own thought. I have come to the conviction that if you cannot translate your thoughts into uneducated language, then your thoughts were confused. Power to translate is the test of having really understood one’s own meaning.”

Do you want to improve your teaching? Do you want to teach God's grace more clearly? Here’s an exercise for you—whether you teach a congregation, small group, or children and grandchildren, ask them to define the following words:

I also want to become a better preacher, so email me what you discover.