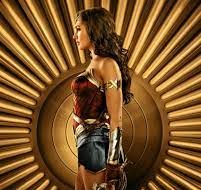 In Chronicles of Narnia, C. S. Lewis used the term “deeper magic” as a metaphor for the gospel. He didn’t explicitly put in a Christian sermon, but the concepts still rang out clearly in the story.

Likewise, if you listen carefully to culture, you’ll hear echoes of gospel themes—echoes of that “deeper magic”—present in secular novels, music, and movies, if only despite themselves.

For example, our family recently watched Wonder Woman (2017), which is set during WWI. Wonder Woman suspects that Aries, the Greek god of war, is behind WWI and goes on a mission to find and kill him to bring peace to mankind.

Without giving any spoilers, at a crucial moment in the movie, Wonder Woman argues with Steve Trevor—her partner and love interest—over whether humanity is worth saving.

“My mother was right,” Wonder Woman says. “She said, ‘The world of men do not deserve you.’ They don't deserve our help, Steve.”

“It’s not about ‘deserve’!” Trevor replies.

“They do not deserve our help,” Wonder Woman insists.

“Maybe we don't! But it's not about that. It's about what you believe.”

Do you hear the echo of gospel themes at work in their dialogue? Wonder Woman assumed you had to deserve to be saved. She fought for humanity because she thought we were basically good, and that the evil in the world was caused by Aries, not by man. But Trevor challenged her, arguing that no one is good. We’re all part of the problem. So, no one would be saved if salvation depended on deserving it. Instead, salvation is about believing. Now, it is unclear what Trevor means by believing.

As the scene continues, Wonder Woman becomes reluctant to help save humanity. But then she gets an epiphany about grace after witnessing Steve Trevor willingly sacrifice himself to save a group of people. And as he said, he didn’t do that because they deserved it. That act changes Wonder Woman’s perspective so that when she finally confronts Aries, they have a dialogue where their positions have been reversed.

“They do not deserve your protection!” Aries argues, echoing what Wonder Woman told Steve Trevor.

“It's not about deserving,” Wonder Woman says. “It's about what you believe. And I believe in love.”

That echoes the “deeper magic” of the gospel in two ways.

First, it reflects God’s attitude toward the world. Why did God send Jesus to die on the cross for our sins, defeat death, rise again from the dead, and offer us eternal life? Was it because we deserved it? Not at all. God chose to make salvation about grace, His love for the world, and not our merit.

Second, it echoes the gospel because receiving salvation depends upon believing, not on being good enough to deserve it. Wonder Woman saves the day because only she has the power to do it. She believes it’s the right thing to do. The innocent civilians can only stand by and watch her beat the Germans. Likewise, we have no power to save ourselves from sin, death, and the devil. Only Jesus can save us because He loves us. What we can do is believe in Him.

Whereas C. S. Lewis purposely wrote the deep magic of gospel into his novels, every so often, Hollywood does it accidentally. And it makes for an interesting bridge to have spiritual conversations with others.

Thought for the day: God hasn't left Himself without a witness in the human heart, not because we deserve it, but because we don’t.

Have You Ever Considered that Worrying Is a Sin? (Matthew 6:34)
Are Children Blank Slates When It Comes to the Gospel?
Why Are You Spiritually Burnt Out?
1 2 3 … 27 Next »