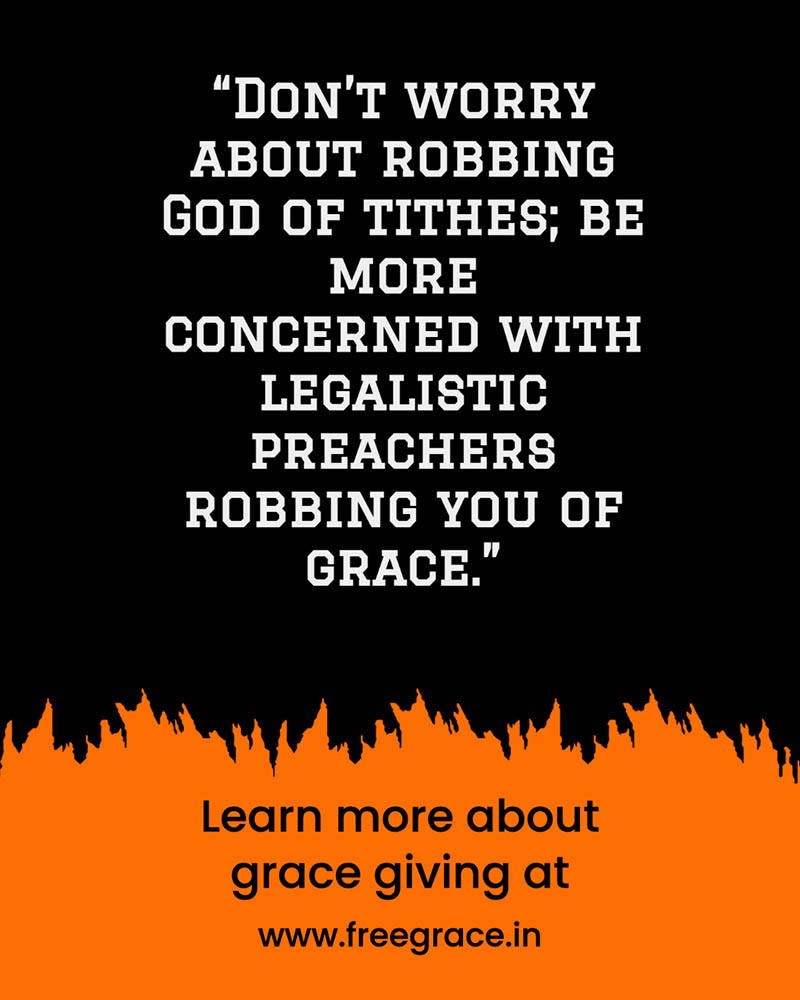 Has a preacher ever accused you of robbing God because you don’t tithe, or threatened you with a curse if you didn’t donate to your church or to another ministry? Christendom is filled with messages of fear and condemnation about giving that are designed to get you to open up your wallet. And these threats are taken from one misapplied passage.

One of the most manipulative ways of getting Christians to donate money is to scare them, and the passage that’s most often used to do that is from Malachi 3. There the prophet acted like a kind of covenant lawyer bringing suit against Israel for breaking the Law:

“Since the days of your ancestors, you have turned from my statutes; you have not kept them. Return to me, and I will return to you,” says the Lord of Armies.

“Will a man rob God? Yet you are robbing me!”

“By not making the payments of the tenth and the contributions. You are suffering under a curse, yet you—the whole nation—are still robbing me. Bring the full tenth into the storehouse so that there may be food in my house. Test me in this way,” says the Lord of Armies. “See if I will not open the floodgates of heaven and pour out a blessing for you without measure. I will rebuke the devourer for you, so that it will not ruin the produce of your land and your vine in your field will not fail to produce fruit,” says the Lord of Armies. “Then all the nations will consider you fortunate, for you will be a delightful land,” says the Lord of Armies (Mal 3:7-12).

Have you ever heard preaching like that? If you didn’t know any better, you might be scared enough to start writing some checks, or superstitious enough to give just to avoid any unnecessary trouble! No one wants to be cursed by both God and demons!

But grace believers should know better than to fall for that type of preaching. How so?

But more importantly, this warning is not for you.

Malachi’s warning was given to Israel under the Old Covenant. They were not giving enough grain to fill the Temple storehouse to feed the Levitical priests.

You’re not an Israelite. The Temple and the storehouse were destroyed nearly two thousand years ago. The priests are long gone. And more importantly, you’re not under the Old Covenant, but in the New Covenant.

It’s true that the Mosaic Law promised blessings for obedience and curses for disobedience, and Malachi 3 is an example of that. But Jesus saved you from the Law’s curses. God sent Jesus to die in your place, and He took the curse of the Law upon Himself:

Christ redeemed us from the curse of the law by becoming a curse for us, because it is written, Cursed is everyone who is hung on a tree (Gal 3:13).

You’re in Christ, and under grace, not under a curse.

Thought for the day: Don’t worry about robbing God of tithes; be more concerned with legalistic preachers robbing you of grace.

Eternal Life Never Dies: A Reminder from Watchman Nee
Does Spanking Your Kids Contradict Grace?
Does Focusing on Christ Mean We Shouldn’t Be Motivated by Rewards?
1 2 3 … 39 Next »